Something very interesting has started to happen in the past couple of weeks. Ever since the IMF issued its warning that austerity might be self-defeating – or, in the jargon, that fiscal multipliers might be greater than one – UK proponents of austerity have quietened down quite a bit. And proponents of doing more have started to venture into new territory.

Thus far, the UK policy response to the downturn has been largely textbook. Faced with a big public sector deficit, the Government embarked on a plan to bring it down over a number of years rather than straight away, for fear of chopping the economy’s legs off. At the same time, monetary policy has stayed firmly in stimulus mode, but remarkably orthodox stimulus for all that. Buying and selling government bonds to influence market rates is not really that unconventional, although admittedly the Bank of England hasn’t done it to anything like the tune of 25% of GDP before. Using quantitative easing (QE) to buy private sector debt would have been decidedly more unconventional, but BoE Governor Mervyn King vetoed that early on.

The problem is that the monetary policy stimulus hasn’t worked. The BoE has consistently over-estimated the positive impact that QE has had on the economy, and as such its forecasts have been consistently too bullish. More and more economists are worried that QE, as it stands, just doesn’t cut the mustard. Some even think the UK could be on the edge of a proper liquidity trap, where monetary policy fails to have any impact at all. If so, some other policy response is required.

If the BoE is impotent, the government is the only player in town. But, at the same time, we still need to bring the deficit down. So how can fiscal policy provide further stimulus to the economy without scaring investors that the UK government won’t be able to pay its debts?

One answer to this question has always been lurking in the background, but is anathema to most economists. Instead of pumping money into the economy via banks and investors, the BoE could do something different with QE – and, in particular, give the money straight to the government.

This would be central bank financing of government spending. Technically, such primary deficit financing is banned by the Lisbon Treaty, but QE has already shown that this is pretty easy to get around (you just get someone else to hold the new Government bonds for a couple of weeks before the BoE buys them). The government could then use the money to build roads, railways, or even just employ people. Critics will note that this policy destroys all boundaries between monetary and fiscal policy, rather than just blurring them. And by removing market discipline on the government, it can also lead to continued outright dependency on central bank funding, which in turn is when hyperinflation can seriously start to take hold. Not for nothing is central bank financing known as the ‘nuclear option’. 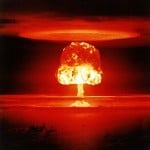 A nuclear option is never something to be taken lightly. But when the likes of Adair Turner and Martin Wolf start musing openly about the possibilities, it is worth paying attention to them. The alternative to not trying different policy options is that we stick with the same old failed formulae; and the economy goes nowhere for another two years. At some point, the costs and risks associated with central bank financing might be exceeded by the potential benefits. When you are fighting – and losing – a war, it is critical to consider all options.