By now we all know that Detroit, once a notorious manufacturing hub in the U.S. economy, has filed for bankruptcy. The city defaulted on its municipal bonds simply because it didn’t have the money to give its creditors. The city had three main reasons for filing bankruptcy: out-of-control budget deficits, declining revenues, and staggering pension liabilities.

Detroit isn’t the first city to file for bankruptcy due to a budget deficit and default on its municipal bonds. We have already seen multiple cities in California and Jefferson County, Alabama do the same thing. Unfortunately, we might see similar troubles going forward—more cities are headed into a downward spiral due to budget deficits and pension liabilities, resulting in severe scrutiny for municipal bonds investors.

A senior fellow at the Brookings Institution (a public-policy not-for-profit research organization), Alan Mallach agrees with this notion. He said, “None of the other cities are far along, but there are dozens, if not hundreds of cities that have similar issues… Every other industrial city has problems that could send them down the same path.” (Source: Selway, W., “Detroit’s Bankruptcy Reveals Dysfunction Common in Cities,” Bloomberg, July 21, 2013.)

Chicago just witnessed a downgrade in its municipal bonds by credit reporting agency Moody’s Investors Service. The main reasons for the downgrade? Its budget deficit and rising pension liabilities. Analysts at the credit rating firm said, “The current administration has made efforts to reduce costs and achieve operational efficiencies, but the magnitude of the city’s pension obligations has precluded any meaningful financial improvements.” (Source: “UPDATE 1-Moody’s cuts rating on Chicago’s bonds, cites pensions,” Reuters, July 17, 2013.)

Keep in mind, dear reader that the size of the municipal bonds market in the U.S. economy has increased significantly. In 1980, only $399.4 billion worth of municipal bonds were outstanding. Fast-forward to the first quarter of 2013, and there were $3.72 trillion worth of municipal bonds outstanding—an increase of more than 833%. (Source: Securities Industry and Financial Markets Association web site, last accessed July 22, 2013.) But all this could be on the line if we hear more of the same from other prominent cities in the U.S. economy. 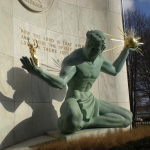 Spirit of Detroit by PeRshGo via Wikimedia Commons

The mainstream often forgets one thing: when cities, states, or even countries for that matter, register a budget deficit, they need to borrow money to pay for those expenses—thus, they issue bonds. Sadly, if the municipal bonds market declines and the cost of borrowing increases, the struggling cities will have troubles raising money to pay for their expenses.

This takes me back to my original belief. As cities struggle, they will eventually seek help from the federal government, which has already registered trillion-dollar budget deficits for each of the past four years. But have no fear, because the stock market is rising, right?