Tom and Misha, the Hisaronu dolphins that were rescued from the hell hole of a shallow swimming pool in Turkey, have finally been released into the deep blue wild.

After we first came across their story in August 2010, we have been following their progress with much interest.

From a shallow, crumbling swimming pool on a very poor diet and forced to wallow in their own filth, Tom and Misha have been released into the clear blue waters of the sea after two years on intensive help.

From the Born Free site: “Rescued from death’s door and the confines of a filthy festering ‘swimming pool’ in Hisaronu, Turkey, nearly two years of careful care and preparation finally reached its stunning climax when the gate to their sea pen was opened for the first time and the two dolphins swam Back To The Blue.

At the opening of Tom and Misha’s gateway to freedom was legendary actress and wildlife campaigner Virginia McKenna OBE alongside Coronation Street favourite, Helen Worth, TV Investigator Donal MacIntyre and Derya Yildirim from the on-site team.”

While the world is mired in economic problems and wars stride the lands again, it is so heart-warming to read such an upbeat ending to a tale that could have ended so tragically two years ago. And the best bit was that this was a combined effort across countries involving celebrities, wildlife organisations, the media and concerned people such as the ‘Dolphin Angels’. What an inspiring story!

Links to the progress of Tom and Misha:

The cruel exploitation of Tom and Misha

Tom and Misha – a video update 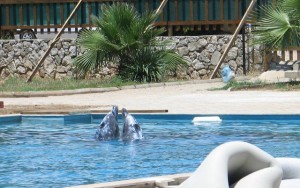 The Suffering of Tom and Misha

The decline of bee numbers