Too little too late for Labour

Polling for the 2017 general election begins in less than two days and the latest betting from Sporting Index shows that Labour are making a strong late surge, but it won’t be enough to deny Theresa May of her premiership.

As it stands, the leading spread betting firm has projected the Conservative Party to win 362 seats, while Labour are heading for their worst ever election result at just 207 seats.

However, the current prediction of 207 red constituencies is way up on pre-campaigning forecasts of just 170. Jeremy Corbyn’s popularity has surged since 5 May, with the prediction on his party’s seats rising an astonishing 40 percent. 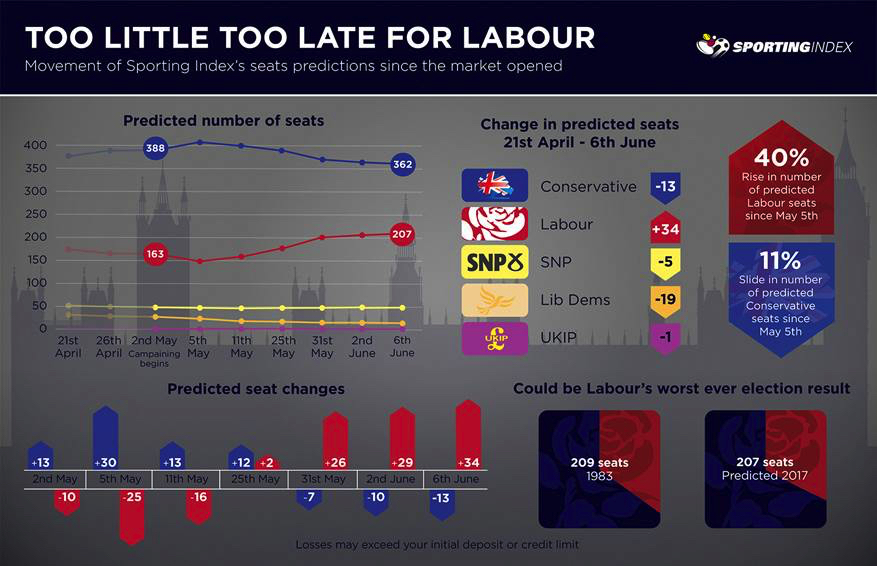 Sporting Index had the Tories on course to smash Margaret Thatcher’s 1983 haul with a record 405 seats, but a raft of selling from spread bettors has forced that commanding figure down 11 per cent to a current mark of 362.

As for the Liberal Democrats, the spreads suggest campaigning hasn’t gone too well for Tim Farron and Co. His party have shed 17 seats on Sporting Index’s initial prediction, down from 31 to a mere 12.

“The election is still Theresa May’s to lose but the momentum is undoubtedly with Jeremy Corbyn. The latest spread betting figures would get Theresa May over the line with 362 seats, but Labour have surged 40 per cent since campaigning started and any further boost could propel us towards a hung parliament.

“As it stands, Jeremy Corbyn is about to lead his party into its worst ever election result with just 207 seats. It’s tough reading for the Lib Dems too, with today’s spread showing just 12 seats will be yellow once the votes are counted.”