So, a top football tipster has been revealed as a girl (But she's been saying she's a bloke).

Kimberley Lloyd-Owen has been revealed as the brains behind one of the UK's most successful football tipping websites goaladviser.net.

Kimberley, 23, launched Goal Adviser 15 months ago – but decided to pretend she was a man because 'without a proven track record a young girl would simply not be taken seriously on Planet Football.'

But now her booming business is turning over Â£200,000 per annum Kimberley has decided to 'go public' and reveal who she really is, to prove that it is not who you are but what you know.

Cardiff-born Kimberley said: "I didn't want to be written off as a typical blonde bimbo. I wanted Goal Adviser (www.goaladvisor.net) to have a chance of establishing itself, and winning a reputation for delivering big money for its customers".

"There was a lot of speculation about who was behind Goal Adviser. Names like Terry Venables and George Graham cropped up in various forums.

"This year Goal Adviser will turn over more than Â£200,000 for the first time, and the number of my online followers is just over 30,000 and growing by the day. I am very proud of that."

The University of Glamorgan law graduate began taking an interest in football betting five years ago when she placed her first bet on a Cardiff City game.

Since then, Bluebirds' fan Kimberley has personally won more than Â£220,000 with bets on Premier League and Championship games – and she has just treated herself to a customised black Range Rover Sport!

She added: "I'm passionate about cars. And, like any girl, I love shopping!

"I don't have a partner at the moment. Men can be a bit funny when the talk turns to football and I know more than them."

She writes a weekly blog, and posts her winning betting slips as proof that she backs her tips with her own money.

Her best bet to date? 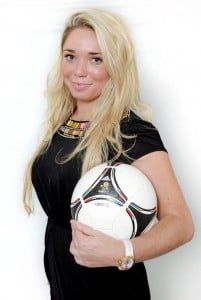 Funds – to track or not to track

Why I'd Still Stay Away from Bitcoin