Despite all the hype and talk around the Newark by election most pundits believe that a Robert Jenrick Tory win is inevitable and that all that is at stake is the size of the majority over the next party as well as which party that is.

There have been various polls on the matter, but there is only one poll that matters and that is the election itself, which started this morning.

There is one other usually reliable method of predicting the outcome and that is using the Bookies. After all, opinion and intention polls are just that, opinions and intentions, whereas the bookies odds are based on people putting their hard earned dosh where their beliefs are.

Looking at the odds this morning the Conservative party is odds on favourite at anywhere between 1/16 to 1/14.

UKIP’s Roger Helmer comes in second with odds of between 6/1 and 7/1, but still way ahead of the third placed Labour Party candidate whose odds are between 40/1 and 100/1.

The independent candidates, Paul Baggaley and And Hayes, come in fourth and fifth with odds of 100/1 and 200/1 respectively.

The Liberal Democrats are next quoted at 250/1 down to 500/1 showing the extent of their current demise. 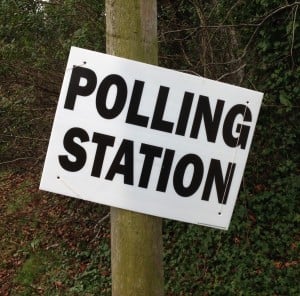 The ‘Patriotic Socialist Party’ and ‘Stop Commercial Banks Owning Britain’s Money’ both have odds of 500/1 and the ‘Bus Pass Elvis Party’ gets between 500/1 and 1000/1.

Bringing up the rear are Common Good and the Monster Raving Loony Party at 1000/1.

The most popular bets according to odds checker.com are on UKIP (7/1) followed by the Tories (1/14).

So there you have it, the Conservatives to win, but will the margin be as wide over the second placed UKIP as the bookies odds seem to predict?