In a political bombshell for David Cameron, just returning from his holidays, the Conservative MP for Clacton, Douglas Carswell, has announced that he is defecting to the UK Independence Party.

Sitting beside Nigel Farage (currently the happiest and widest grinning party leader in the UK) the ex-Tory MP also said that he would be resigning as an MP in order to do the honourable thing and give his constituents the right and proper chance to choose him as a UKIP MP, although he does not need to.

Mr Carswell said that the Conservative leadership were only paying lip-service to reforming the EU for electoral purposes and that they were still fully committed to staying in whatever, a stance he could not support hence his defection to UKIP.
Douglas Carswell has been on UKIP supporters’ radar for sometime as a potential defector, many hoping that he would be the first to come across.

A Conservative party spokesman has said that this decision by Mr Carswell is 'regrettable' and ‘counterproductive’. 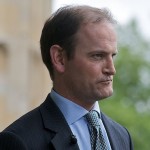 Now of course David Cameron will have to decide on who to replace him with as the Conservative candidate in the forced by-election. Will he be using a local figure or will he identify a big hitting outsider that he can parachute in (Boris anyone?)

Anyone who thought that the Conservatives and UKIP as well as the media went over the top in the recent Newark By-election, where UKIP made huge inroads into what was a massive Tory majority, have seen nothing yet. Standby for the invasion Clacton!

This by election, which UKIP will want to happen quickly, will see both sides flooding the area with activists. This will be a massive test of the UKIP message, a failure here could well put the party back years and even place Farage’s leadership in question.

Steel yourselves for the political battle of the year, or conversely switch the TV and internet off for a few weeks. This will not be a quiet battle.

"Douglas Carswell’s defection is a hammer blow to David Cameron.

"Confidence in David Cameron is collapsing inside a Conservative party which is divided and running scared of UKIP.

"David Cameron's weak leadership has seen him abandon the centre ground, repeatedly trying to pander to his own right-wing backbenchers rather than concentrate on the needs of the country. Now even his own side are abandoning him.

"This is a Prime Minister who is running out of MPs as well as ideas on how to make the big changes this country needs to see. This turmoil inside the Conservative Party shows that they are too busy obsessing with themselves rather than standing up for the public.”

The bookmaker William Hill has made Douglas Carswell hot favourite to win the Clacton by-election for UKIP. Hills quote him as red hot 2/7 favourite, with his former party, the Conservatives 5/2 second favourites. Labour are 33/1 with the Lib Dems at 100/1.

‘Mr Carswell seems to have a strong personal following in the constituency and by-elections are notoriously tricky for governing parties to win’ said Hill’s spokesman Graham Sharpe.

UKIP are now 14/1 with William Hill to be included in any coalition government as a result of the next General Election for which Hills now offer 11/10 no overall majority, 2/1 Labour majority, 5/2 Conservative majority, 3/1 Con/Lib coalition, 4/1 Lab/Lib coalition, 14/1 coalition invovling UKIP, 66/1 UKIP majority, 500/1 Lib Dem majority.

"This is shaping up to be the most open General Election betting of all time", said Graham Sharpe.

Immigration: good for whom?