The Conservative Party rising star, Nadhim Zahawi, has taken a liberal stance and called for the government to grant an amnesty for the estimated half a million illegal immigrants living in the UK.

This it is argued would then allow all these people to come out of the darkness and into the open to join the economy, become legitimately employed, pay tax and also benefit from the benefits of living in this country.

Others argue that this would effectively open the floodgates to more immigration as others flocked to the UK hoping that they can stay hidden here while waiting for another amnesty in a few years time.

Although the heart says that it must be humanitarian to offer amnesty, the hard truth is that this would in all probability be abused time and time again. A one off amnesty this year would be followed in a few more years by another one off, then it would be every five then two years and eventually the question would be asked 'why have borders and passports?'.

The Tories though are not generally known for their love of unlimited immigration, so why has this 'rising star' put his head above the parapet to fly the kite on this one – unless asked maybe? (And the PM seems to be quiet on the issue today – unless he'll be coming out to slap the upstart down shortly.) The Tories may be thinking that a lot of resources (money) could be freed up in the short term by giving amnesty and it would also make them more attractive to many voters just by airing the idea.

But if amnesty were given the amount of effort afterwards that would be required to negate the need of another amnesty in short order would be massive (and expensive). (As UKIP points out, Spain had six amnesties in 20 years and in that time, the number of illegal immigrants applying under the schemes rose from 44,000 to 700,000 – a 15-fold increase.) And their popularity boost would last as long as the proverbial snowball in hell.

Nigel Farage, the UK Independence Party leader has rejected the idea as a move to make the party more attractive to the immigrant vote saying: 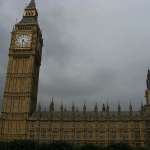 Palace of Westminster by Mark Ahsmann

"Mr Zahawi is seen as a rising star in the Tory party. In order to curry favour with minority voters he wants to legitimise half a million illegal immigrants, thus giving them full access to all welfare benefits. The clue, if he is interested, is in the word 'illegal'.

“To do this, in order to shore up failing poll ratings for the Conservative party would be to sacrifice the interests of the country to narrow sectional political considerations. It shows that the Conservatives cannot be trusted on immigration any moreÂ  than the Labour Party can.”

Farage went on, “Our immigration system is disastrous and our treatment of migrants is frequently appalling, but all international experience of migration amnesties shows us that they encourage more inward migration. Claims that the UK would be immune from this as it is an island are risible. If so, there wouldn't be at least 500,000 illegal immigrants here in the first place."

Forgotten Invoices Means SMEs Lose Out On Billions Each Year