Double crossing his partner in a high profile art heist, auctioneer Simon (McAvoy) suffers amnesia following a head injury incurred in his subsequent getaway, the resulting memory loss means that Simon cannot recall where he has hidden the stolen prize.

A problem when the betrayed partner is a criminal named Franck (Cassel), a heavyweight who insists that Simon consults a hypnotherapist named Elizabeth (Dawson) in a an attempt to locate the stolen painting.

Danny Boyle is a slick and often stylish director whose fast editing and intelligent content guarantee an engrossing and thought provoking movie experience, albeit, one that normally leaves an exhausted audience ready to dwell upon the events they have just witnessed.

This energetic trademark is perhaps perfectly suited to the genre of the heist movie and this latest feature, Trance, is a thriller that finds the film maker constantly cutting to the chase via a never ending series of twists and turns that become increasingly fantastical as his story of art thieves and hypnotists race towards an overblown climax.

Enroute to that ending there is much to enjoy on this new take on the genre with the thriller surprisingly sharing much in tone and set piece with the violent undercurrent and chemically induced visions of the cult classic Trainspotting (1996).

James McAvoy provides a charismatic opening narrative, leading the viewer wonderfully into the opening heist and the thrill of the chase, however, this initial buzz is somewhat misleading with the film revealing a darker tone as the action quickly zooms in on the collective group of criminals and their hired therapist.

What follows is a cleverly staged but uneasy mixture of genres with sharp comedy, violent suspense, and grotesque horror all thrown into the melting pot prior to the film revealing its true nature as a vengeful psychological thriller with a moral twist.

The constantly changing tone along with each increasingly outlandish revelation provide for an intriguing but unbalanced viewing experience and although the film is admirable in its attempts to create something ambitious and meaningful it never quite feels like the collective sum of its parts.

Central to the film is the use of the hypnotic dream state and the director successfully manages to use the prop to both surreal and nightmarish effect, increasingly blurring the line between reality and the inner self, each successive trance is ushered in by the calming vocal chords of Dawson, whose voice, seemingly has the power to place even the most hardened criminal under her spell.

The brooding dream sequence with McAvoy and his art loving albeit corrupted auctioneer visiting a gallery housing every masterpiece lost or stolen to history may well be one of the standout moments of the year and the trances themselves recall the dreams found in the Christopher Nolan thriller Inception (2010).

There are also moments of mind bending horror that echo the gorefest found in the David Cronenberg classics of yesteryear with Cassel and his crime boss seemingly talking from the dead in a scene definitely not for the faint hearted.

It also takes a leap of faith to buy the fact that this increasingly violent and insular group of individuals are not under any kind surveillance via the authorities with that most famous movie prop, the police detective, conspicuously absent from events.

Boyle and his energetic thriller are supported by three watchable and intensely likable performances with McAvoy sharing screen time with the ever excellent Cassel as the charming criminal displaying a violent underside and Dawson as the femme fatale turned avenging angel.

Highly ambitious and darkly uneven, this is a thriller that requires the viewer to suspend belief with each successive twist.

Definitely worth a view. 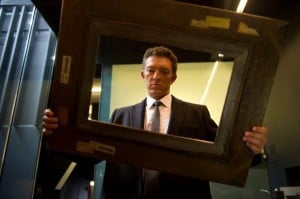 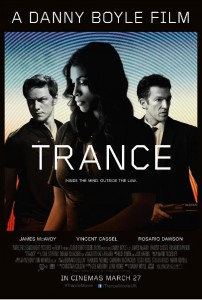