Danny Alexander, the Chief Secretary to the Treasury, is expected to announce today that he is imposing tough new rules on government departments to ensure that spending is kept under tight control.

In a speech to the Institute for Fiscal Studies, the LibDem chief secretary will say that government departments must abide by a new two point plan or face penalties.

He is also expected to be highly critical of Labour’s ‘deficit denial’ and its approach which would just prolong the UK’s time spent in austerity.

The two new rules, which some are seeing as a Treasury power grab says the Guardian, to be outlined by Mr Alexander are:

Firstly, that the departments must monitor and share their spending information with the Treasury every month rather than on the current quarterly basis.

Secondly, that the departments identify 5% of their resource budget that could be put aside to be redirected to address unforeseen events or pay for new initiatives, or identify items that could be cut to provide the funds.

These new rules “will demonstrate the collective determination of government to ensure that never again will our nation’s finances be allowed to get into such a mess”. He is expected to say.

“Delegated responsibility for spending cannot be an excuse to hide information, close the books, or weaken financial management.

For too long financial management in Government has been stifled by poor information sharing and poor incentives. That has to change. From now on, all departments must monitor and share spending information with the Treasury on a monthly basis.” 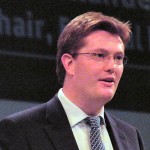 He is expected to add that this is not just a ‘tweak’ to the system, but a sign of the coalition government’s “…unwavering determination to deliver the fiscal consolidation we promised”.

This move, says the Telegraph, is to identify Â£16 billion in savings on top of the cuts already made.

Whether it is a Treasury power grab or more austerity, these rules may well give the government machine much more flexibility when unforeseen events threaten to bite because the arguments and studies will have already been conducted. All that would be required would be a swift stroke of the pen to redirect the funding.

But will the people who could be adversely affected by such cash redirection be forewarned of the risks?

It would also make the redirection of funds to the IMF et al easier should our pledges of support ever be called upon to keep the Eurozone for example afloat.

US dollar pressured lower by drop in consumer confidence

House Prices Up 11.1% Over The Last Year