Trenton Oldfield ordered out of the UK

While it seems to take decades to not get rid of those that call for violence against the UK (unless a foreign King steps in to make it happen) a non-violent protestor is quickly imprisoned and kicked out.

How is this justice?

I grant you that Trenton Oldfield may (with a BIG question mark) have put other lives at risk, but all he did was put himself in harm's way to make his point. Just as Emily Wilding Davison did in 1913, but she sadly died under King George V's horse at Epsom and is now hailed as a heroine.

What happened on that 2012 Oxford and Cambridge boat race day was that an elite sports spectacle was spoiled for a short time. No-one died and no-one was hurt.

You could say that the resultant boat clash that broke an Oxford oar so consigning them to the loss was all down to him, but it was not he who decided when to restart the race nor was he steering them. 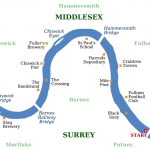 So for a thirty minute delay to the race and a bit of controversy he gets a six month jail term as well as deportation back to Australia. Seems well over the top considering the difficulty we had getting agreement for Abu Qatada to get out.

Oldfield, who has no previous convictions, has a partner in the UK, Deepa, and they are expecting a baby (due today I understand), so where are their rights to a family life that so many highly undesirables use to stay in the country? One person fighting deportation even successfully used their cat to stay in the country!

Then consider the light sentences that have been handed down to some convicted of far more heinous crimes recently.

You may not agree with what he did but this punishment is taking a rather large sledgehammer to smash a very small nut. Where was the court's sense of proportion in all this? How much of a danger is he really to the UK?