With new elections now looming in Greece, many fear that a Greek exit is now all but decided. Analysts worry in particular that the party that came second in May’s poll, the left-wing Syriza, will come top in any new vote. As such, everyone is very keen to uncover exactly what Syriza’s leader, Alexis Tsipras, wants to do.

Leaving aside questions of feasibility for a moment, in recent interviews Tsipras has spelt out what he wants to happen. He wants Greece to stay in the euro, he says, but without austerity. The only way that this can happen is for Europe to agree a new deal with Greece that does not require further budget cuts – that is, yet more support for Greece from its neigbours. At the moment, policymakers throughout the euro area (not just Germany) are lining up to say that this simply won’t happen. If Greece doesn’t abide by the terms of the bailout, they will cut funding and Greece will go bankrupt. Tsipras’s strategy is therefore very simple – he is calling Europe’s bluff.

Tsipras is gambling that the costs from a disorderly Greek exit are so large that, at the last minute, European policymakers will have a change of heart and back his country wholeheartedly. In technical terms, he thinks that Greek debt will be socialised by the rest of Europe, and on unconditional terms. A disorderly exit would wreck the Greek economy – a floating (sinking) domestic currency doesn’t buy you immediate export growth or flexible labour and product markets – but Tsipras thinks that the damage to the rest of Europe would be so large that they would have to acquiesce to his terms.

Most of the direct exposure to Greece is via the Eurosystem. The Bank of Greece’s latest accounts, published at the start of this month, showed that in January Greece owed the rest of the Eurosystem â‚¬107bn via the Target 2 system. Essentially, Target 2 is a mechanism for ensuring that monetary deficits in one country – where a national central bank lends to domestic institutions – are matched by surpluses elsewhere within the currency union, so as to maintain an overall liquidity position (at the moment, the German Bundesbank is currently owed lots of money by everyone else). If Greece left the euro, it would have to pay this money back. In addition, the ECB probably still holds about â‚¬50bn of Greek debt, which would probably have to be written off, or at least any eventual recovery would take so long it might as well be.

This total cost of under â‚¬200bn is manageable with the resources that are already in place under the ESM/EFSF. Instead, the big problem is whether the ensuing market contagion would be manageable. Once Greece had gone, investors would worry that Portugal, Ireland or even Spain could follow. Yields would spike and we would witness capital outflows to ‘safe’ European countries (and further imbalances in the Target 2 system). Spain rolls over a lot of debt on a short-term basis, and would struggle to fund itself at 8% or 9% 10Y interest rates. The question would again be whether the economy and citizens could withstand the fiscal pain (austerity) that was required to get the country’s debt dynamics back on a sustainable footing, within the time frame that any bailout allowed. The stakes, however, would be much bigger.

Tsipras is therefore trying to hold the rest of Europe to ransom. Personally, I have some sympathy with the Greek people in general, as they have seen sharp cuts in living standards over the past three years. But I suspect that Tsipras’s attitude will harden others against supporting Greece, more than anything else.

Intriguingly, Tsipras’s brand of economics also seems to challenge the orthodoxy of the past thirty years or so that inflation is bad and capital inflows can be good. His broader comments about austerity more generally destroying Europe suggests his views on fiscal policy hark back to the 1970s. Ultimately, a country either has to run balanced primary budgets (and small surpluses overall to pay off interest), or it has to convince its bondholders that it will pay them back. Tsipras seems not to believe in either of these – but he will struggle to borrow money from anyone if Greece drops out of the euro. Would even the Greek people buy new Greek bonds outside the safety of the euro? Only if strict capital controls were imposed, further hitting growth and development. 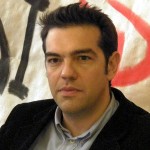 Ultimately, a Greek exit could result in widespread financial carnage and prolonged, not just temporary, inflation, as the central bank was forced to create money just to keep the economy from total collapse. If Tspiras cannot borrow or balance budgets, it will have to print money. To be clear, this would not be the Greek equivalent of the BoE buying up gilts, with few visible inflationary effects – it would be the equivalent of the central bank of Zimbabwe adding more zeros to the pieces of paper in circulation. Living standards in Greece would fall for years.

Tsipras is right to aim for more support from his euro area neighbours, and to point out that austerity has been largely self-defeating thus far. But his stance and beliefs hint at a real risk that Europe suddenly finds one of its former members turning into a third-world nation. He might even find himself on the receiving end of the sort of popular backlash that he has successfully ridden so far.