Speaking at the Green Party’s Spring Conference, Natalie Bennett attacked the transatlantic Trade and Investment Partnership (TTIP) and its supporters for promoting a corporate agenda over the rights and interests of EU citizens.

The controversial proposed free trade agreement between the European Union and United States, which could be agreed by the end of the year, aims to gradually remove all regulatory differences between the US and the EU (1). The European Commission has called it “the biggest trade deal in the world” (2). Yet many people are not aware of the proposals and the secretive decision making process behind them has been criticised as being wholly undemocratic.

“TTIP is a huge threat to hard-fought-standards for the quality and safety of our food, the sources of our energy and our privacy and risks undoing decades worth of EU progress on issues like worker’s rights.”

Bennett stated that the proposed deal threatened to “blow apart the power of our democratic decision making.” She raised the spectre of the Edward Snowden revelations to demonstrate that the US state was “profoundly untrustworthy”.

"It’s not surprising, really, when we hear Lib Dems trumpeting the proposed US-EU free trade deal as some kind of economic saviour. The Lib Dems are the lapdogs of corporate Europe, while the Tories are its war horses. In their support for the trade deal, the Lib Dems are reiterating the propaganda of multinational companies interested only in swallowing up new markets, consuming new societies whole. 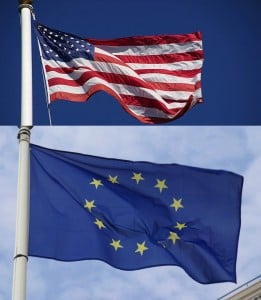 "Let’s make no mistake, the proposed free trade deal is a huge threat to hard-fought-for standards for the quality and safety of our food, the sources of our energy, workers’ rights and our privacy. One of the great contributions of the EU is to set a foundation of these standards – not good enough, not high enough – but a start. The proposed free trade deal is a supertanker of dynamite that would blow those foundations apart.

"And more, it would blow apart the power of our democratic decision making. The deal provides corporations with new rights to sue the Government for legislating in the public interest – that’s definitely not acting for the common good.

"The banking lobby is so happy with the financial services proposals it has said that the text could have come straight from its own brochure – that’s acting in the interests of the 1%, not the common good.

"And there’s more. It’s a deal being proposed with a state that the bravery of Edward Snowden demonstrated is profoundly untrustworthy. Yet there’s no openness – no democracy – about the negotiations: the mandate that the EU Council gave to the Commission is still classified as ‘secret’."