As analysis now shows that rail commuters are paying higher fares than those using comparable routes elsewhere in Europe as well as a Which? report showing trust in rail is low, both the TUC and the Green Party are arguing that the UK rail system needs to be re-nationalised.

As many people prepare for their first day back to work after the Christmas break, rail campaigners are today (Thursday) warning that British commuters could be spending over three times more of their salary on rail travel than passengers on publicly-owned railways in France, Germany, Spain and Italy.

The TUC's and rail union's Action for Rail (AfR) campaign has compared average earnings with season tickets covering similar commuter routes across Europe. This analysis, published today, reveals that commuters using privatised rail services in the UK are paying much higher fares and spending substantially more of their wages on rail travel to work than commuters using publicly-owned trains elsewhere in Europe.

Regulated rail fares will rise between 3.1 and 5.1 per cent from today – more than four times faster than average wage increases – adding extra misery to the squeeze on living standards, says AfR.

"That a Which? survey released today indicates that trust in the rail industry is even lower than the financial sector shows that the public understands that our privatised system has failed.

“Now it's past time for the government to acknowledge the huge costs of privatisation; the Rebuilding Rail report put them conservatively at £1.2bn a year – a sum that could provide an 18% fare cut for all.

"We should bring the railways back into public hands, ending two decades of 'great train robbery' by the train operating companies.

“That's what Green MP Caroline Lucas's private members' bill calls for. Train travellers facing more fare rises might like to ask their local MP if they're backing it."

"Rail passengers and taxpayers are being poorly served by a privatised rail service that has failed to deliver any of the efficiency, investment and cost savings that privatisation cheerleaders promised.

"While the shareholders of the private train operating companies are doing well for themselves on the back of massive public subsidies, passengers are paying the highest share of their wages on rail fares in Europe. Rail passengers must wonder why they can't have the same cheap and more efficiently run state rail services that exist elsewhere in Europe."

"Passengers are fed up with the poor value they are being offered by Britain's privatised train companies and want the government to do something about it.

"We warned a year ago that more and more people are falling into transport poverty and these new figures make this point well. It cannot be right that passengers are being forced ­- because they have no meaningful choice – to pay through the nose just to get to where they work.

"These new fare rises are only going to exacerbate the problem and drive even more people into transport poverty." 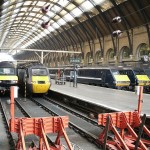 "2014 is all set to be another year of racketeering and greed on Britain's privatised railways. Passengers will continue to pay the highest fares in Europe to travel on creaking, overcrowded trains where raw sewage is dumped on the tracks because the private operators will not stump up for tanks and the staff to empty them. That is a sickening indictment on our privatised railways as we head into the New Year.

"The only solution – and one that's opposed by all our main political parties – is total re-nationalisation and the return of our railways to complete public control."

"David Cameron has increased rail fares by 20 per cent since arriving in Downing Street – an intolerable burden on passengers who have seen their real wages fall over the same period.

"Rail fares have more than doubled since the Conservatives sold off our railways 20 years ago. Our passengers are now paying the price – the highest fares in Europe."

"This is startling proof that British commuters are being ripped off by sky-high train fares which have been caused by privatisation. Travellers will rightly be angry with the train operating companies when they see how their European colleagues spend far less on rail fares.

"UK commuters spending over three times more of their salary on rail fares than European workers is proof that rail privatisation is a busted flush and that Britain needs national rail under public ownership."

Green peer Jenny Jones joind the 'End the Rail Rip-off' protest organised by Action for Rail at King’s Cross station tomorrow morning to show her support for the campaign, handing out mock tickets to passengers, which highlight high the costs of fares and privatisation and call for public ownership of the railways..

State surveillance in the UK set to go out of control