Women apprentices are far more likely to end up in low-paid jobs as a result of training in female-dominated sectors, according to new research published today (Wednesday 11th December 2013) by unionlearn – the TUC's learning and skills organisation – and the National Apprenticeship Service.

The study shows that while there has been a large rise in the number of women taking apprenticeships over the last ten years, many end up working in female-dominated sectors, such as early-years childcare and hairdressing, where wages tend to be lower and where there is less chance of career progression.

The report, Under-representation by gender and race in apprenticeships, warns that gender stereotyping is dissuading young women from pursuing careers in traditionally male industries.

The study also raises concerns about the low number of black and Asian people taking apprenticeships, especially in higher-paid sectors such as engineering and construction.

– There is a gender apprenticeship split – the number of women taking apprenticeships has more than doubled over the past decade. However, women are still pursuing careers in 'traditional sectors' that offer lower wage returns and career opportunities than sectors where men tend to do their apprenticeships.

By contrast, over nine in ten apprentices who started in the hairdressing (92.2 per cent) sector were women.

This 'gendered' imbalance in apprenticeships mirrors the gender segregation seen in the workforce more generally.

"There is genuine political will to try and improve apprenticeships and people's access to them.

"However, this research shows that huge inequalities remain. Young women still overwhelmingly find themselves pursuing careers in 'traditional' industries which tend to pay less, and black and Asian people continue to be under-represented in key sectors of the economy.

"Unless we create better training and employment opportunities for young people, and challenge gender stereotyping and discrimination from the outset, the situation is not going to improve.

"Unions, employers and government must work together to provide better careers advice in schools and to support and improve opportunities for all young people."

As well as highlighting areas of concern the report also identifies examples of good practice that have helped overcome gender stereotyping.

These include one employer providing two-week 'taster courses' for women thinking of applying for construction apprenticeships and 'girls into engineering' days where female students can visit a local refinery, meet female staff, and take part in practical tasks associated with the job.

• Policies aimed at addressing gender segregation should be targeted at the bottom end of the youth labour market. This will involve schools promoting apprenticeships as an option for all and challenging traditional gender stereotyping from an early stage.

• More research into the barriers facing black and Asian people looking to take up apprenticeships and employers' recruitment strategies which may prevent this.

• More taster courses and work experience for young people before they decide on their chosen apprenticeship. 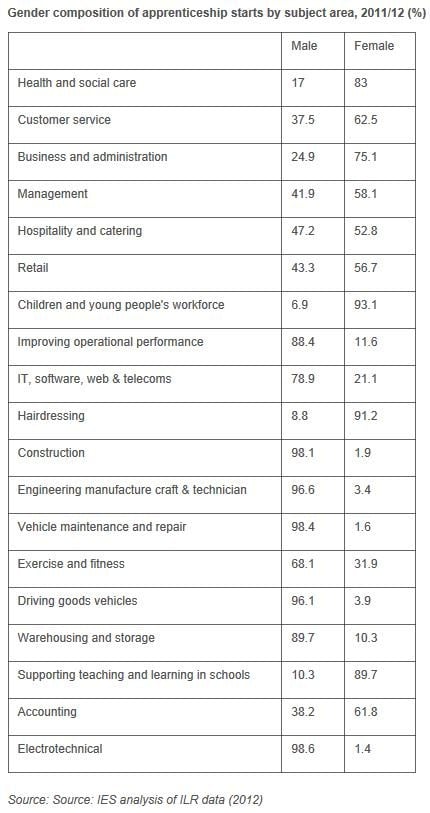 Despite industry fears, Salmond says independence would be good for Scotch whisky