Anis Amri had been approached during a ‘routine patrol’ because he was acting ’suspiciously’. On being challenged he pulled a handgun from his bag and shot one of the two police officers, Christian Movio, who is recovering in hospital. The other officer, a trainee named as Luca Scatà, gave chase and shot the terrorist dead.

This will come as a great relief to many, as this person will no longer pose a threat to innocent people.

But you have to ask yourself how he had managed to travel so far, so quickly in the modern age of ‘intelligence led’ policing.

The truth is he managed to get from Berlin to Milan in just a few days, with some reports saying he travelled via France. As Germany has no direct border with Italy, he would have needed to traverse either France, Switzerland, Austria or Slovenia. All the while presumably armed with the gun he used to shoot one of the Italian police officers with.

This placed the citizens of every country within the Schengen zone in jeopardy, as well as giving the fugitive a much easier route out of the EU. With national borders in place and properly enforced, it would have been easier to contain the terrorist, or make him more likely to ditch his weaponry in trying to flee across a border.

Then there’s the fact that this man was previously convicted and jailed for arson in Italy but was then freely allowed, after release, to travel to Germany to carry out his atrocity. There are also other unsavoury aspects to his past that would have led any sane asylum/immigration system to reject him.

It was also lucky for the rest of us (and for the police officers involved) that he was stopped and challenged by those equipped to deal with an armed criminal. Otherwise more innocent blood could well have been shed.

We should also recognise that this event was not the result of a planned operation, it was because of two dedicated and brave policemen ‘on the beat’ doing their job. The Italian police had no prior information that he was in the city.

"It gives no one in UKIP any pleasure whatsoever to state 'we warned you'. Nigel Farage made it patently clear earlier this year that ISIS would use the refugee crisis and Merkel's 'open door invite' to the Middle East to smuggle hundreds of jihadists into Europe. 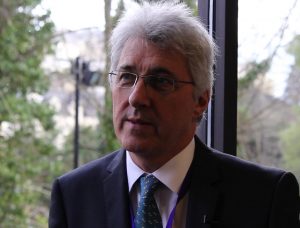 "The slaughter of innocents in Paris and Nice was no coincidence and the latest atrocity in Berlin shows that ISIS is now at war with Europe. The EU's continued support of Schengen and uncontrolled immigration both within and from outside the EU is both costing innocent lives, leaving hundreds with life threatening or life changing injuries and undermining social cohesion and our Judeo-Christian culture.

"That Anis Amri was able to enter the EU from Tunisia, be jailed in Italy, escape to Germany, kill and maim in Berlin, then flee back to Italy, through France, where he was shot dead is testament to the failure of the EU to protect it citizens and control its internal & external borders.

"Only one Party  in the UK has had the political courage to consistently warn of the dangers of uncontrolled immigration and the loss of sovereignty to the EU and that party is UKIP.

“UKIP must continue speaking truth to power and ensure that the UK is fully removed from the ticking time bomb that is the EU. History will judge that at a time of despair and tribulation only UKIP stood tall and was willing to fight for our hard fought for values and right to run our own affairs via a fully sovereign Parliament.”

“Pay to praise EU” Lords should not be debating UK sovereignty