The holiday season means we will need to wait longer than usual for December’s flash Eurozone CPI estimate; it is due on 7th January. Our real-time inflation metrics, however, are already giving an early indication that the release could signal the arrival of a belated present for Draghi in his quest to cajole his colleagues on the ECB into full blown QE. 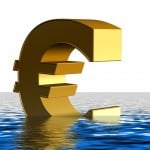 With 12-days of December online prices already recorded from our PriceStats metrics this even a flat reading looks unlikely. As Figure 1 warns our online price index is already 0.24% below the average level of the index in November (the average reading for December so far is 0.12% lower). The implication is that from current levels mid-month, online prices will need to accelerate very sharply, at an equivalent monthly rate of just over 0.5% in the second half of the month, for the average price level in December simple to equal the average price level seen in November. The rate which if replicated in the official data is needed to avoid the headline rate dipping into negative territory.

It is true that central banks would typically look through weaker inflation readings generated by volatile items like energy prices.  January’s inflation data meanwhile will bring with it the lottery of highly volatile (and seasonal swings) in clothing prices. However, with headline inflation so close to the zero bound and inflation expectations tumbling, the ECB has no such luxury at present. The realisation of deflation in the official data on January 7th, could easily be the catalyst for the ECB to ease at its first meeting of the year. 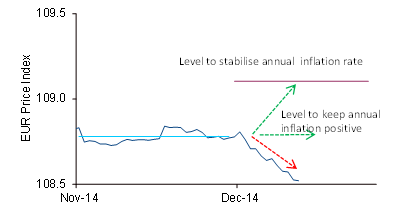 Tories Should Declare Level of Cap on Social Care Bills

Swiss franc is hot again and Euro under pressure