Two of Colombia’s top Caribbean beach locations have been nominated in the Best Beach Destinations in South America category for the World Travel Awards (WTA).

San Andres, an island covering 27sqkm situated 700km from the Colombian mainland, and Tayrona National Park, a protected beach area near Santa Marta on the country’s north coast, will compete against each-other and several other South American beaches.

The President of the Colombian Agency for the promotion of Tourism, Trade and Investment, Proexport Colombia, MarÃ­a Claudia Lacouture, says: "International tourists visiting both Santa Marta and San Andres can enjoy unique experiences such as scuba diving in one of the largest coral reefs in the Caribbean, or re-discovering the cradle of an indigenous civilisation."

San Andres is a miniature paradise with influences from England and Spain and consists of perfect beaches, excellent water-sports, diving and ecotourism. One of Colombia's most popular national parks, Tayrona is situated on the jungle-covered coast at the foot of the Sierra Nevada de Santa Marta. The park stretches along the coast from the BahÃ­a de Taganga near Santa Marta to the mouth of the RÃ­o Piedras, 35km to the east. The scenery varies from sandy beaches along the coast in the north to rainforest at an altitude of 600m on the southern limits of the park. 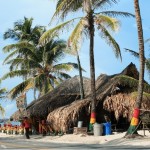 The World Travel Awards were launched in 1993 to acknowledge and recognise excellence in the global travel and tourism industry. Now celebrating their 20th anniversary, they are regarded as the highest achievement that a travel product could hope to receive.

Voting to make Tayrona and San Andres the best beach destinations in the region will be open until 2nd June.

Fireworks, Fastnet and Festival: Plymouth is the place to be!