Having spent decades successfully immersed in the world of banking and finance, Dr. Mahmood Y Abdulla has learned to research, question and re-question things most take for granted. A scholar with a passion for public speaking, Dr. Abdulla is also keen to share everything he learns.

That’s no exception in his two new books, ‘In The Minds of Extremists’ and ‘The Ailing Capitalism’ – both written to compel readers to redefine their assumptions and embark on a boundless journey of discovery.

‘In The Minds of Extremists’ and ‘The Ailing Capitalism’ may have boldly-different focuses, but both attempt to challenge everything readers thought they knew about their respective subject matters. From the origins of the word “Jihad” and the development of the extremist mentality, all the way to unravelling the mysteries of the stock market, Dr. Abdulla calls on his professional experience and wisdom to leave readers with plenty to think about. 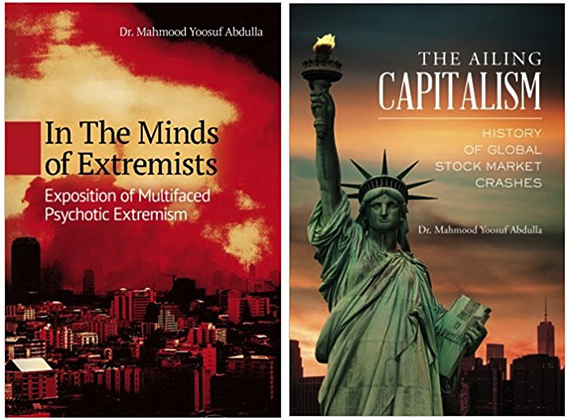 ‘In The Minds of Extremists: Exposition of Multifaced Psychotic Extremism’ – Jihad has become a word associated with terror, blood, and tragedy. Yet its original meaning refers to a much more internal war against temptation to commit sin and evil deeds. How did this definition become so external and literally a war? This book explains how and why jihadist militancy and extremism have become so irrevocably linked today.

In the Minds of Extremists analyzes how this mentality formed, how it functions, and why it continues to grow in developed countries. Looking to past and present political and religious climates, Dr. Mahmood Yoosuf Abdulla seeks to clarify how they related to and influenced the growth of extremism.

Turning to examine the human rights violations and genocides that have spread through countries that became obsessed with the divine authority of their leaders, the book speaks to how such political climates heralded the rising popularity of intolerant ideologies.

In understanding the core and mindset of extremism, we can understand what it means for the global community, and we can learn from the past in an effort to prevent it from being repeated in the future.

‘The Ailing Capitalism: History of Global Stock Market Crashes’ – Think you know everything there is to know about the wild world of the stock market?

Stock market crashes have been around since the Great Depression of the 1930s. Whether it traverses continents, like the meltdown of 1987, or situates itself in one place, like the collapse of the United States’ property market in 2007, these crashes can be devastating—not only to the investor but to the economy at large.

Abdulla who spent thirty five years in the profession of accountancy as the Fellow member of the Association of Chartered Certified Accountants in London, expertly tracks and explains the cyclical nature of these phenomena while placing the blame for these events squarely where it belongs: in the laps of the speculators and swindlers who threaten the livelihoods of small and private investors because of their greed.

Comparing the modern investment and financial world to that of a high-stakes casino, Abdulla explores the more ethical aspects of investment as a way to get ahead.

Learn how to protect yourself from fraud in the world of investment with Abdulla’s refreshingly straightforward advice.

“Both books tackle vitally-important subject matter that is usually torn apart and misconstrued in the court of public opinion,” explains the author. “For example, our attitudes toward extremism are always evolving and, dare I say it, straying too far from the truth. Equally, our macro opinions of the economy and particularly the stock market are often misinformed. I want to set the record straight.”

Continuing, “While the books tackle less-than-simple topics, I’ve deliberately written them in a way any layperson can understand. I urge you to pick up a copy of each; you’ll be left with plenty to think about.”

The books are available here:

In the Minds of Extremists

A glimpse of British homes through the decades

Gaming to go over $100 billion