Against a backdrop of record-highs for stocks, consumer confidence is waning—seeing its greatest drop in four months. The S&P 500 touched record intra-day territory earlier in the week, suggesting the bull market remains intact and the well-earned and (far too) short-lived mini correction may be over.

Investors and analysts, it seems, have embraced blaming the cold weather for all our economic ills, effectively brushing aside weak U.S. housing numbers, jobs data, and manufacturing and retail sales.

Meanwhile, consumers—those who need jobs, houses, cars, and other items that support the companies that actually make up the S&P 500—seem to have lost faith in the economy. Consumer confidence levels in the U.S. fell more than expected in February, as Americans became more pessimistic about the economy and jobs.

Not to fear though; The Conference Board said the decline in February's consumer confidence toward business conditions, jobs, and earnings was only "moderate," meaning, I suppose, that it could be worse.

But not too much…

Those optimistic Americans claiming jobs are plentiful increased slightly to 13.9% from 12.5%. Those who think jobs are hard to get were virtually unchanged at 32.5% from 32.7%. It's incredible, really, that The Conference Board can, with a straight face, proclaim that our appraisal of current economic conditions has "improved" for the fourth straight month while essentially skimming over the eye-watering one-third of Americans who think jobs are hard to get. 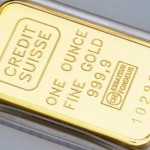 That said, current optimism is tough to champion when more and more Americans expect U.S. business conditions to worsen. Those who think the U.S. economy will improve over the next six months slipped to a new four-month low of 16.3% from 17.0%, while those who expect business conditions to worsen over the next six months increased to 13.3% from 12.2%.

Not surprisingly, consumer confidence over the jobs market is also more pessimistic. Those anticipating a stronger jobs market in the coming months fell from 15.1% to 13.3%. Those who expect the jobs market to worsen increased to 20.6% from 19.0%.

One divergent play that performed well during the so-called mini correction is gold. SPDR Gold Shares (NYSE/GLD), the largest physically backed gold exchange-traded fund (ETF), is up 9.5% since the beginning of the year, and Market Vectors Gold Miners ETF (NYSE/GDX) is up 22% since the beginning of January. On the other hand, the S&P 500 is in the red year-to-date.