Two years, one month and four days is the time it takes to feel better following bereavement

Sue Ryder, the national hospice and neurological care charity, has published new research which provides a unique insight into the UK's experiences of bereavement and demonstrates that people may be suffering longer than they need to.

The charity's ground-breaking research reveals that it takes an average of two years, one month and four days to feel better following the death of a loved one and proves that sharing experiences of bereavement has a positive impact on how long it takes people to feel better.

Those surveyed who had people around them to talk to during bereavement felt better earlier following a loss, whereas those who didn't have any support grieved, on average, for an additional eight months, three weeks and five days.

More than a third (36.5%) of Brits surveyed also said bereavement had a considerably negative effect on their wellbeing, with some even considering suicide. Despite individuals choosing to deal with their grief in different ways, the research shows a quarter (23.3%) of us suffer in silence, bottling up our emotions which eventually catches up with us at a later date.

People aged 45-54 years old took more than twice as long to feel better than 16-24 year olds and female recovery seems to take exceptionally longer than that of males. It takes nearly two years and four months for women to start feeling better compared to men, who said it took them on average just over one year and nine months. 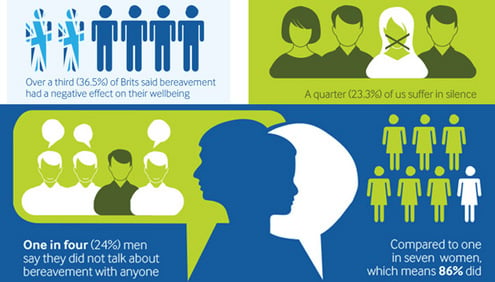 Men are, perhaps unsurprisingly, less comfortable than women discussing bereavement, with one in four (24%) saying they did not talk about bereavement with anyone compared to one in seven (14%) women. Most of those who have been through bereavement revealed they found it difficult to talk about it and some were too embarrassed to admit they were scared or upset.

This research further demonstrates the need for Sue Ryder's new online community and support, funded by the charity's national partnership with supermarket chain Morrisons, which aims to provide advice and support for those dealing with death, dying and bereavement. From expert Sue Ryder nurses on hand for advice, to support on how to deal with diagnosis and treatment.  The online community and support connects together those who are experiencing bereavement and provides support and advice to help them to better prepare for and deal with loss.

"This ground-breaking research gives us a provocative insight into how we deal with grief as a nation. It is unsurprising that so many people try to deal with their loss on their own but that it catches up with them at a later date.

"Bereavement can be a long and difficult process and we've launched our new online community and support to help people who are struggling to come to terms with a friend or loved one's death and would benefit from receiving expert advice and tips as well as peer to peer support.

"The service also seeks to better prepare people before a loved one dies and provides advice with everything from how to cope with their terminal diagnosis through to place of care decisions and how to plan before and after their death.

"Death affects everyone connected to that person and we hope our new online community and support will better support people during the most difficult time of their lives."

An apple a day keeps the doctor away