Uday Kotak, the Founder, Executive Vice Chairman and Managing Director of Kotak Mahindra Bank has been named EY World Entrepreneur Of The Year 2014 at an awards ceremony held in Monaco’s Salle des Etoiles. Uday was picked from among the 60 country finalists vying for the title from 51 countries, each of whom has already been named the EY Entrepreneur Of The Year in their home countries.

Uday Kotak set up Kotak Capital Management Finance Ltd in 1985. In 2003 the company became the first non-banking finance company in India's corporate history to be converted into a bank. It has progressed from seed capital of less than $US250,000 to an international group with US$2.8b in revenues. Headquartered in Mumbai, the bank has 605 full-fledged branches across 354 locations across India and international offices in London, New York, Dubai, Abu Dhabi, Mauritius and Singapore and is considered one of India’s leading financial services conglomerates.

“It was an incredibly tough decision, but Uday shone through for the way he created a new bank in a challenging and highly regulated environment that has a positive impact in the community. We were impressed with his strong focus on inclusive growth, providing low-cost services to rural customers that have a tangible impact on people’s lives.” 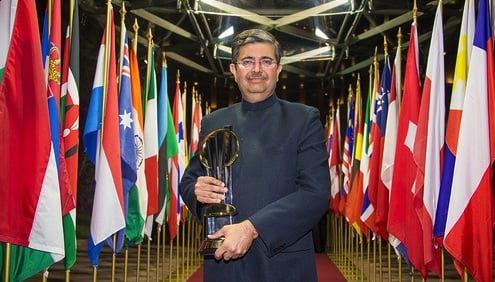 “I’m delighted and honored to receive this prestigious award at such a spectacular event. It is recognition of the skills and dedication of the 25,000 employees of KMB who have worked so hard to build a world class Indian financial services brand.”

“Uday is a wonderful example of an entrepreneur who, with a clear vision and strategy, took on established institutions by rewriting the rules of his industry to build something from scratch.”

“The world now needs entrepreneurs more than ever to create sustainable, permanent jobs to help secure a global economic recovery. Uday is a truly inspiring World Entrepreneur Of The Year winner for 2014 and together, he and our 59 other country winners are truly helping to build a better working world.”