Seen as damaging to tourism, business and labour mobility

Travellers in the UK are hit by some of the world’s highest taxes on flying, according to a new study by UHY Hacker Young, the national accountancy group.

UHY Hacker Young says that the global average, based on countries where aviation taxes are imposed, is currently £15 ($23) on short haul flights and £35 ($53) on long haul flights. Many countries, however, do not currently impose any taxes on individual air passengers.

Although taxes on flying are often billed as ‘green taxes’, UHY Hacker Young points out that in the UK, as elsewhere, the revenue raised is not ring-fenced for environmental protection projects.

UHY Hacker Young explains that the UK government has recently taken some steps to reduce the high costs facing air passengers. APD for under-12s was abolished in May of this year. As of April 1, charges on journeys over 4000 miles were also reduced. Levies on journeys between 2000 and 4000 miles, however, increased.  In Northern Ireland, pressure to scrap APD entirely in order to help Belfast airport compete more effectively with Dublin airport was rejected by the Northern Ireland Executive.

UHY Hacker Young says that the most expensive taxes are for long haul flights departing from a Russian airport, where unlike many other countries, airline tickets are subject to sales taxes.  The highest taxes of any G8 economy are in the USA, which imposes £15 ($23) worth of taxes on a short haul ticket.

Many smaller European countries do not impose any taxes on individual passengers, including Ireland, Slovakia, Belgium.  In many cases there has been intense lobbying by local airports and business groups to keep taxes on flying to a minimum to prevent travellers using airports in neighbouring countries with lower taxes.

“Airlines provide a crucial piece of infrastructure.  They facilitate a great deal of economic activity that is essential for countries that want to benefit from globalisation.  The higher taxes on flying in the UK hurt airlines, business users and consumers.

“Countries and cities that are expensive to fly to lose out on tourism.  High air taxes can also be harmful to businesses, as in many commercial relationships there is simply no substitute for face to face contact.

“For smaller businesses, the cost of flying to see customers may be a serious consideration in deciding whether not to expand into new markets, especially overseas – it can lock them out of globalisation.  Air Passenger Duty can add another 10% to the cost of flying, so it can pose a meaningful additional burden on budgets.

“The recent lowering of charges for under-12s and long haul travellers and the discussions in Northern Ireland indicate an awareness of the problem, but the reforms do not go far enough. Charges remain considerably higher than in many other EU countries.”

UHY Hacker Young adds that in the BRIC economies, flight taxes are actually higher than the global average, at an average £17 for a short haul flight.  Long distances between cities and relatively weak road infrastructure in these countries make the alternatives to flying significantly less attractive, especially for business trips, so flights are a tempting target for taxes.

UHY Hacker Young explains that this approach imposes greater disadvantages on more isolated regional cities because they may become too expensive as a destination or location for a business.  It notes that Russia, Canada, the USA and Australia – all geographically large countries – have four of the five highest taxes on flying in the study.

UHY Hacker Young adds that on top of taxes and compulsory payments imposed by government bodies, additional airport fees levied on individual passengers for a short haul flight amount to a typical £15 around the world.

Although airport fees are usually passed on to the consumer, airlines often complain that the charges amount to an abuse of an airport’s monopoly status if it has a particularly favoured geographic location near a major city.

Airlines also add their own charges such as ‘fuel charges’ which many consumer groups argue should simply be included in the cost of the flight.

Adds Roy Maugham: “For consumers, taxes and fees are confusing; they mean the final ticket price is usually a shock.  They also add to the headache of working out how much extra a flight booked using air miles will actually cost, as well as what can be reclaimed if a customer has to cancel their ticket.”

“A major European study five years ago recommended that all air fares should state simply the basic air fare, airport charges and government taxes which are levied per passenger, and the total price.  The study said that the costs of operating the flight, such as ticketing or fuel, need to be included in the basic air fare.”

“In the UK and around the world, the issue of complex charges is an area where far greater progress needs to be made to ensure better transparency and competition.  Businesses and consumers would greatly benefit if regulators and tax authorities kept aviation taxes low and ensured that charges were more transparent.” 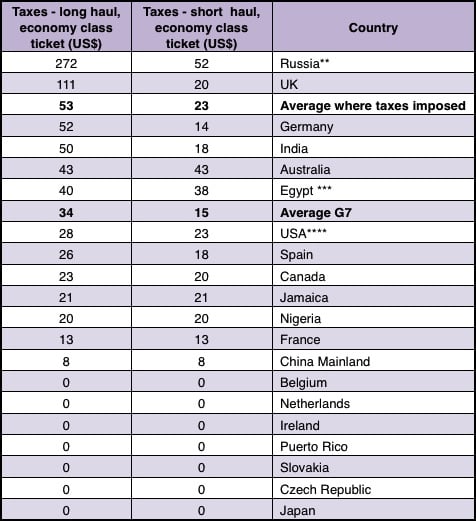