UK an Attractive Tax Regime Except for Media and Political Debate

The UK's tax regime has maintained its position as one of the most attractive against key competitors as perceived by executives in large businesses operating in Britain, according to KPMG's seventh annual survey of tax competitiveness.

When respondents were asked to name their top three most attractive countries from a tax perspective, the UK was the most commonly cited in that group, albeit Luxembourg, Ireland and Switzerland have slightly closed the gap.

Looking at specific areas of tax, the results suggest that, in the main, business is not looking for further changes. Indeed, simplicity and stability were ranked as more important than a low effective tax rate.

Jane McCormick, Head of Tax at KPMG in the UK, said:

"Our research shows that the efforts that the current and previous government have made to address anomalies and improve the attractiveness of the UK to business from a tax perspective are bearing fruit. Policymakers recognise that business is a powerful growth engine, creating jobs, wealth and generating economic activity. The dial seems to have moved on the UK's tax regime from it being an actual deterrent to business and economic activity just five short years ago when some PLCs were emigrating, to it now being positively attractive, especially when viewed in the context of the UK generally being seen to be a very desirable place to live, work and do business. Even better, the results suggest there is no need for a 'race to the bottom' on rates with few respondents calling for further rate cuts."

1. A levelling of the playing field on tax as the UK ranks just ahead of key European competitors:

The UK has maintained its position as the most commonly cited country when respondents are asked to name their top three but Luxembourg and Ireland have narrowed the gap in second and third places respectively. These latest results suggest that there has been a levelling of the playing field on tax. The UK leapt into first place in 2012 and, although it has narrowly held on to that lead, it is now ranking closely alongside key competitors.

See Figure 1: Countries with the most competitive tax regimes (overall any mention in top three). 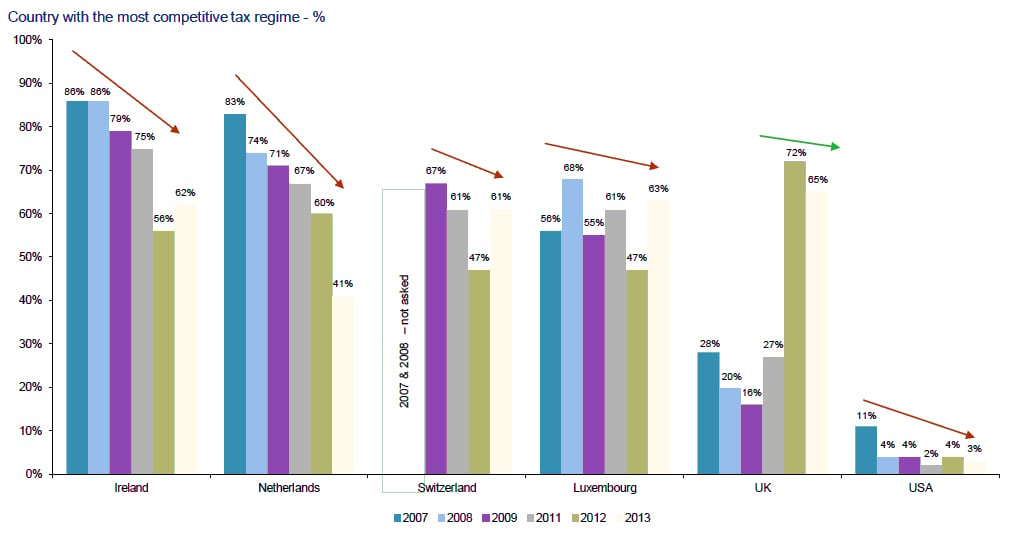 2. The tax debate has a mixed effect – UK PLCs say it could deter investment, foreign owned subsidiaries are more neutral:

Although the UK has become more attractive to business in terms of its actual tax regime, some of the rhetoric around tax could deter investment to the UK, according to the survey. 67% of FTSE 350 respondents said the media and political debate is likely to reduce investment in the UK with the sentiment even more marked among the FTSE 100 where 88% took this view. Executives in foreign owned subsidiaries were more neutral on the debate with 80% saying it had had no effect and the remainder equally split on whether it made them more likely to reduce their UK investment or, conversely, to increase it.

4. Targeted incentives for capital investment could encourage growth over the next 12 months, say respondents:

With an eye on the forthcoming Autumn statement and thinking of what measures might drive UK growth, respondents were asked what single specific tax or regulatory measure could be used to drive growth over the next 12 months. The most popular cited was to provide tax relief on capital investment, followed by simplification or reducing complexity and then by increasing certainty. The impact of these potential changes could be significant, according to the survey. Respondents were asked what effect the changes they suggested might have on their own organisations. Results from those who were able to quantify the impact of their proposed measures suggest that cumulatively for this small group, the effect adds up to over 10,000 jobs (16 companies), a further £37m in research and development spend (seven companies) and £700m additional capital expenditure (17 companies). Looking purely at those who suggested tax relief on capital investment and were also able to quantify the impact, the figures are: an increased head count of 800 (three companies), additional capital expenditure of £320m (10 companies) and an increase in research and development of £35m (three companies).

5. While respondents overwhelmingly support the OECD's work on 'Base Erosion and Profit Shifting', there are hints that some mooted changes could reduce the UK's tax take:

Three quarters of the sample said that they supported the general aims of the OECD's action plan to tackle 'Base Erosion and Profit Shifting' with the sentiment even more marked in the FTSE 100 where it was 97% in favour. The three most important areas for the OECD to address, according to the sample, are Transfer Pricing, Digital Economy and Intellectual Property. Country by Country reporting has also grown in acceptance since 2012 although almost half of respondents said it should not be introduced at all.

However, the survey suggests that changes to taxing rights to focus on where customers are based could reduce UK tax revenues. 25% of FTSE 100 companies said they would expect to pay more tax overseas and less in the UK if there was a shift in the tax base to focus on where customers are located by changing the 'Permanent Establishment' definition or moving to a more destination based tax.

Chris Morgan, Head of Tax Policy at KPMG in the UK, concluded:

"The challenge for policymakers now is to stick to their pledge on tax. The government has committed to making the UK tax regime the most attractive in the G20 and our results suggest we are well on our way towards that.

"However, the current debate on tax threatens to undermine some of the progress that has been made. Undoubtedly there are areas of the UK and international tax system which need to be addressed; our sample was almost unanimously supportive of the OECD's work on 'Base Erosion and Profit Shifting', for example, although we hope that government will listen carefully to their warning that some of the mooted changes could result in their paying less not more tax in the UK before committing to firm changes in this area. Additionally, business also needs to make sure it plays its part in the current debate so it was encouraging to see that over half of respondents said they had become or planned to become more transparent on tax."

An executive summary of the 2013 KPMG Tax Competitiveness Survey is available here.