UK and Ireland Have Highest Death Duties of all Major Economies

The UK and Ireland take the highest proportion of inheritance tax or estate tax of any major world economies, according to a new study by UHY Hacker Young, the national accountancy group.

The UK government would typically take 25.8% from the estate of an individual passing on assets worth US$3m*** to their heirs, well above the global average of 7.67%. This figure takes into account the doubling up of the £325,000 threshold that is typical when the deceased has survived their spouse or civil partner. If only the £325,000 threshold is available – for example, because the individual has never been married – the proportion of tax taken by the UK would be far higher, with a tax take of 32.9% on an estate of US$3m.

Several developed countries, including Australia, Israel and New Zealand, have chosen to abolish inheritance taxes in order to create simpler tax systems and encourage the creation of wealth, whether through investment or entrepreneurship.

UHY Hacker Young explain that the level at which the inheritance tax thresholds is set is a crucial issue for middle class families.

This means that a tax that was originally designed to apply only to the very wealthy now affects an increasingly large proportion of the population.

By contrast in the USA the 40% federal estate tax applies only to estates of over $5.34m, and so only affects those with substantial assets. Moreover, the US has raised the threshold for paying the estate tax several times over the last decade, increasing it to its current level from$1,500,000 for deaths in 2004 – 2005.

Prime Minister David Cameron has recently hinted that the Conservative Party may revive their previous electoral promise to raise the threshold for inheritance tax to £1 million per estate.

“Big inheritance tax bills can reduce the incentive to keep creating wealth in order to pass it on to your family. They can also deprive the next generation of capital that traditionally has been key to funding the establishment of new businesses.

“That is why dynamic developed economies like Australia have scrapped inheritance taxes altogether, and some emerging economies have never imposed them.

“By contrast in the UK, the Exchequer has become increasingly reliant on the substantial income streams generated by inheritance tax. It has been seen as a lucrative way to extract tax revenues from a relatively ageing population: retirees frequently have lower levels of taxable income, but substantial assets such as mortgage-free homes.

“As more and more UK families are caught in the inheritance tax trap, pressure for major reform is growing.”

The UHY study found that European countries generally levy the highest inheritance taxes of all, with EU countries in the study taking 15% tax on the inheritance of a property of US$3million, nearly twice as much as the global average of 8%. Many emerging economies have traditionally not imposed inheritance and estate taxes which are seen as discouraging wealth creation. For example, China, India and Russia all have no inheritance taxes.

“Inheritance tax has become a big earner for the UK Treasury, and inevitably, as rocketing house prices push more and more people into its scope, there is a greater incentive to plan ahead and try and reduce the liability.

“There are specifically targeted investment reliefs from inheritance tax which encourage people to continue to invest productively by making investments in unlisted trading company shares. These can be used as a route to reduce the tax exposure.

“There are also gifting exemptions that allow individuals to pass on wealth while they are still alive, so that inheritance tax can be mitigated entirely if an individual makes gifts to their heirs at least seven years before their death.

“But it would be simpler and more effective by far for the Treasury to scrap the tax altogether or at least to increase the threshold at which it is paid in a meaningful way, something that David Cameron has been dropping heavy hints about. 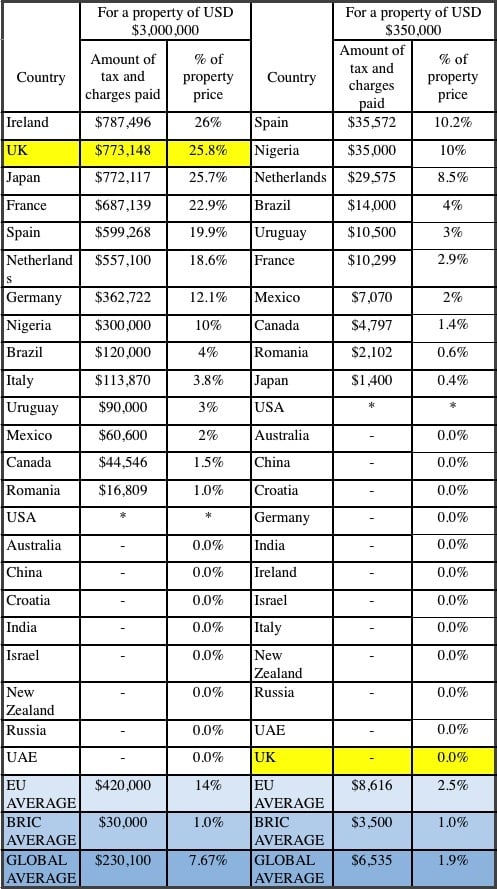 *** Property price of £1.83million / EUR2.49m (exchange rates as at 10 February 2014). Calculations based on a passing on a home or equivalent cash sum to two adult, non-dependent children. Where taxes are levied on a state / local level, a national average has been used. Figures for the UK assume the deceased had been in a civil partnership or marriage and is able to use the £325,000 nil rate allowance of the partner that pre-deceased them. No other special allowances such as Italian exemption for acquiring a first home apply.