The latest data from the Office for National Statistics shows that the Consumer prices Index (CPI) grew at 1.5 percent over the year to Aug 2014, a reduction on the 1.6 percent seen in July.

The inflation measure that takes into account the costs of an owner occupier, CPIH, was unchanged from July at 1.5 percent. It should be noted that this measure is not now a national statistic as more work is needed on the measure.

The updated measure of RPI – RPIJ, which uses formulae that meet international standards – remained the same as in July 2014 at 1.8 percent. 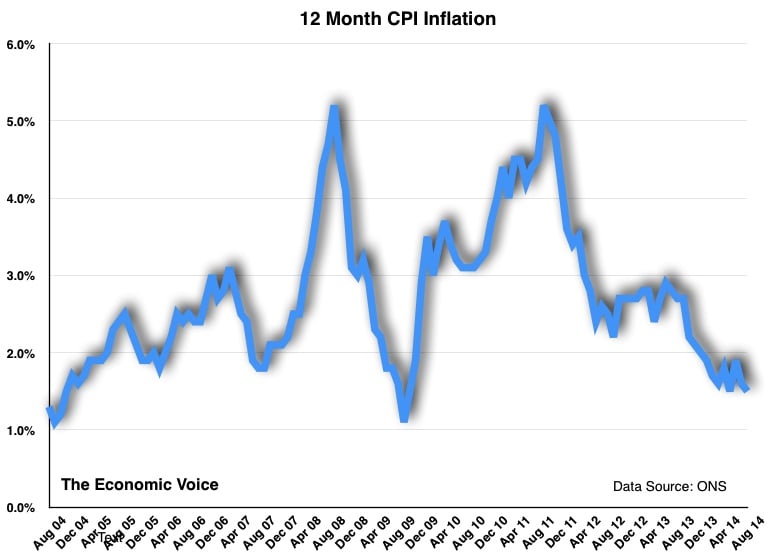 “The drop in the price of oil, combined with a variety of other factors, suggests that the UK is set for a sustained period of very low inflation. Weak wage growth, plenty of slack in the economy, anchored inflation expectations and the continued effect of sterling’s appreciation over the past year, all point to inflation remaining well below the MPC’s target for the remainder of 2014.

“However, one economic indicator that has recently shown rapid inflation – house prices – saw the rate of price growth pick-up. According to the ONS, house prices in August saw the largest increase since July 2007. The housing market continues to present a complication for the MPC in what is otherwise a fairly benign environment for monetary policy. However, with the FPC in a position to apply further macro-prudential tools in the event of the market getting too bubbly, we don’t think that that the latest housing numbers will strengthen the case for a rate rise.”

“Inflation remains low, falling to 1.5% from 1.6% in August. Despite this, we cannot forget that the markets are predicting an average inflation level of 3.3% per annum over the next 20 years. If we work on that basis, at some point inflation will be running at more than 4% in any particular year. When looking to protect pension income from inflation, people approaching retirement today should remember that they need long term inflation protection even if the headline rate today remains relatively low.

“To this end, they should look to defer the state pension to increase this guaranteed source of inflation protected income and invest away from cash in favour of a diverse set of stocks, shares, bonds and property so as to generate income that will rise as inflation does.”