The latest estimates for the UK economy balance of trade deficit shows a widening of £2.6 billion from £8.5 billion in June 2015 to £11.1 billion in July.

This, said the Office for national Statistics (ONS), was down to an increase in the deficit of trade in goods, whilst trade in services in July remained the same as in June at a surplus of £7.7 billion.

UK exports of goods decreased in July by £2.3 billion to £22.8 billion, which is the lowest export figure since September 2010 said the ONS. 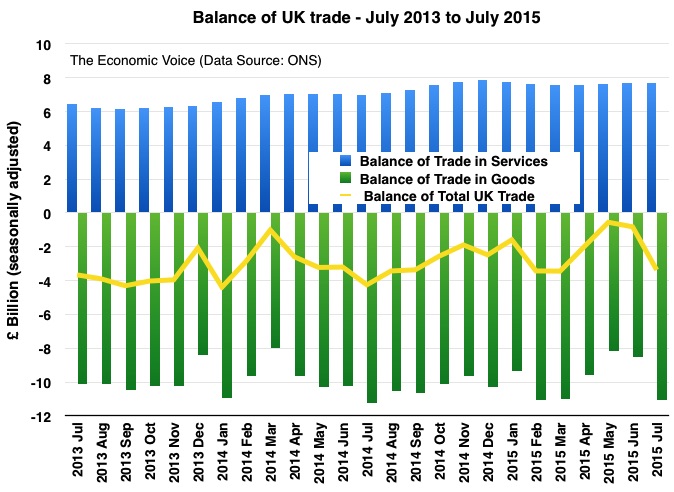 “The increase in the trade deficit and fall in manufacturing output are both signs of George Osborne’s neglect of the need for a balanced recovery.

“The trade in goods has sunk to a five year low and exports have not kept pace with the Chancellor’s ‘march of the makers’ promise.

“The sharp falls in manufacturing and exports suggest that the economy is entering tougher times. And with the failure to fix long-term problems, like Britain’s low rates of investment and innovation, the government’s severe spending cuts will put the recovery at even greater risk.

“These are worrying times for working people and their families, who remain hard-pressed after the longest fall in living standards on record. We need a better economic plan for a stronger and fairer economy that works for the many, not just the few.”

Commenting on both the trade and production figures out today Martin Beck, senior economic advisor to the EY ITEM Club, said:

“The monthly 0.4% drop in industrial production confounded the consensus expectation of a 0.1% rise and matched the fall seen in June. Meanwhile, annual growth in output slowed from 1.5% in June to 0.8%, the second weakest performance in almost two years.

“Within overall production, oil and gas output fell by 0.4%, unsurprising given the effect of the lower oil price in making new exploration unprofitable. The data also confirmed that the manufacturing sector continues to struggle to gain traction. Manufacturing output fell by 0.8%, meaning that the sector has contracted in four of the first seven months of 2015. And the latest PMI data for August suggest that the sector will have struggled to grow in that month.

“That said, there were some temporary factors at work behind July’s fall. In particular, summer shutdowns at vehicle manufacturers appear to have begun earlier than usual, contributing to a 2.3% monthly fall in transport equipment.

“Meanwhile, given the importance of exports to the manufacturing sector, it was unsurprising that July’s trade figures made gloomy reading. The overall trade deficit widened from £0.8bn to £3.4bn, a four month high. The value of goods and services exports fell by 5.2% in the month, the biggest drop for two years, while imports rose by 0.6%, In addition, the volume of goods exports dropped by a whopping 9.9%.

“Granted, there was some good news, with the trade deficit in Q1 being revised down to its lowest level since 2000. This suggests that net trade added even more to output growth than the 1% estimated by the ONS in the recent GDP release. But July’s deficit and the barriers to exporters presented by a still relatively strong pound and weak activity overseas suggest that such a boost is unlikely to be repeated in Q3.”