As expected the Bank of England’s Monetary Policy Committee voted today to maintain the Bank Rate at 0.5 percent and keep the asset purchase programme at £375 billion.

The Committee also agreed to reinvest the £8.1 billion of cash flows associated with the redemption of the March 2014 gilt held in the Asset Purchase Facility.

The minutes of the meeting showing how individual members voted will be issued at 09:30 on Wednesday 19th March.

“Today’s decision by the MPC was the first under ‘phase two’ of forward guidance, which encompasses a broader range of parameters beyond unemployment. The decision to leave rates unchanged came as no surprise – while unemployment is falling and there are some signs of growth broadening into investment, we are yet to see an improvement in real wages. The UK economy remains fragile, and raising rates prematurely could put a stick in the spokes of the recovery. Meanwhile, inflation remains in check, leaving the MPC room to focus on supporting growth. 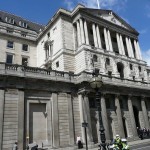 Bank of England by Simdaperce

“We expect the Bank to remain cautious, only raising interest rates once the resilience of the recovery is assured. We expect this to occur in 2015 Q3. And while some commentators fear that low interest rates are inflating a housing bubble, these concerns are overblown. Moreover, interest rates would be a poor choice of instrument to guard against a house price bubble.

“The minutes due to be released later in March will clarify exactly how the Bank’s thought process has changed since the transition to phase two of forward guidance. The MPC members have all spoken with one voice over the past month, and we would hope that the next set of minutes would provide a window into any differences of opinion between them.

“We expect to see more narrative surrounding the finer details of the UK economy, particularly on the level of spare capacity, an issue which is likely to provoke some debate with the committee.”

Campaigners ramp up pressure on MEPs ahead of critical TTIP vote