The top 5 UK banks (HSBC, Barclays, Standard Chartered, RBS and Lloyds) are complicit in fuelling climate change and destroying communities and the environment in the rainforests of Indonesian Borneo through their financing of an Indonesian coal boom, according to a new report released today (see video below).

UK banks have lent more money for Indonesian coal than banks from any other country since 2009, while Standard Chartered, the UK’s second biggest bank, has lent more than any other bank in the world. 83 per cent of coal produced in Indonesia’s top coal province on the island of Borneo is mined by companies part-financed by UK banks according to WDM research.

The report by the World Development Movement follows the Intergovernmental Panel on Climate Change’s landmark assessment of the state of the world’s climate, and comes on the first day of new rules requiring all UK companies to make their carbon emissions public. Campaigners say the UK rules will let banks off the hook by failing to include emissions from fossil fuel projects they finance.

Standard Chartered loaned US$1 billion (£640 million) to Indonesian company Borneo Lumbung in 2012. Borneo Lumbung’s coal mine has polluted the river that the people of Maruwei village rely on according to villagers' testimony given to WDM researchers.

Yesmaida, a woman from Maruwei, told the World Development Movement: “The river is now dark and dirty. Sometimes when we wash, it feels itchy. More importantly, we can’t drink the water anymore. The water used to be clean and clear, not like it is now.”

Barclays has loaned £127 million to Bumi Resources, owner of Indonesia’s biggest coal mine. Bumi Resources is 29 per cent owned by the disgraced London-listed company Bumi plc created by Nat Rothschild. Its Kaltim Prima Coal project has resulted in many people losing their land, with one indigenous village, Segading, having been displaced three times said the villagers.

London-listed mining giant BHP Billiton has received a total of £6.3 billion since 2009 from Barclays, Standard Chartered, RBS and Lloyds, and as it is a FTSE 100 company, almost every pension fund in the UK invests in it. BHP Billiton plans to open coal mines across a vast area of Borneo threatening to destroy large areas of rainforest on which indigenous people depend said the WDM. 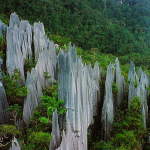 The World Development Movement is calling for rules to stop UK banks and pension funds bankrolling climate change and creating a carbon bubble which threatens to cause a new financial crisis.

Alex Scrivener, campaigner at the World Development Movement, said today: “The coal boom is leaving a trail of destruction across Indonesian Borneo, wrecking the rainforest and wrecking people’s lives. Here as in so many fossil fuel projects across the world, the invisible hand of UK finance is at work. We have to stop our banks pouring billions into dirty energy that fuels climate change and ruins local people’s environments and livelihoods. And we have to stop destructive fossil fuel companies accessing UK investors’ money by listing on the London Stock Exchange.”

According to the WDM the top five UK banks HSBC, Barclays, Standard Chartered, RBS and Lloyds underwrote bonds and shares in fossil fuel companies worth £170 billion between 2010 and 2012. The London Stock Exchange holds more coal reserves than any other stock exchange, and total fossil fuel shares worth £900 billion (LSE 'Companies and Issuers' 31st December 2012), giving dirty coal, oil and gas companies access to money from UK pension funds and investors. The value of shares in renewable energy companies on the exchange is only £5 billion, or 0.56 per cent of the value of fossil fuel shares.

The World Development Movement is calling for the new carbon reporting rules to force banks and pension funds to report the carbon emissions from the fossil fuel extraction they finance, and for regulation requiring them to make public details of their fossil fuel investments. The campaign group is also calling on the Financial Conduct Authority (FCA) to reform the listing criteria for the London Stock Exchange so that companies with poor social, environmental and climate records are unable to list.

Brands are GREAT: British Brands Grow by Over £37 billion