Between April and November the UK public sector net borrowing (excluding public sector banks – PSNB ex) was £75.8 billion, which is a decrease of £0.5 billion compared to the same period last year.

This national debt figure represents 79.5 percent of UK GDP and is an increase of £89.7 billion over November last year. 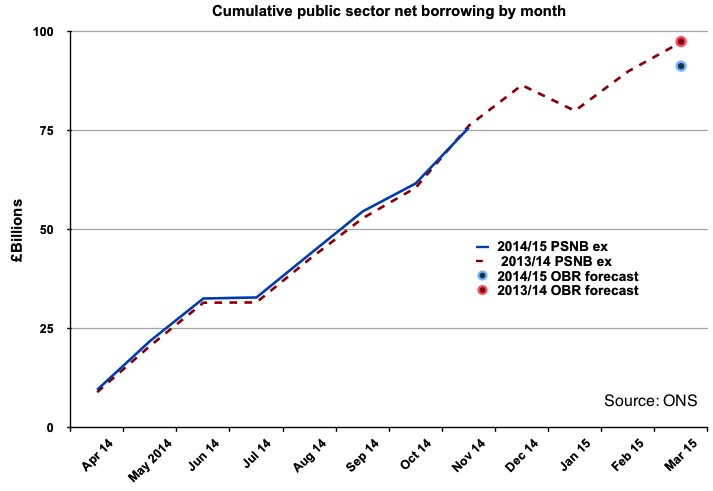 “After a prolonged period of the deficit stubbornly refusing to fall, November’s fiscal numbers may at first seem to provide evidence that the public finances are finally starting to share in the economy’s resurgence. However, the underlying fiscal position is not quite as positive as the headline numbers suggest.

“Overall meeting the OBR’s forecast of a deficit of £91.3bn for 2014/15 still looks like a tough call. Looking further ahead, any delay in deficit reduction would raise questions over the Chancellor’s long-term ambition for a budget surplus and the hefty spending cuts implicit to achieving that.

“Tax receipts in November were boosted by fines on banks for breaking FX market rules. In the absence of this windfall, borrowing would have been a mere £0.5bn below the level a year earlier. Moreover, November’s deficit still leaves borrowing for 2014/15 to date only £0.5bn below that recorded in the same period in 2013/14. So there is still plenty of ground to make up to achieve the annual fall in borrowing for the fiscal year as a whole as forecast by the OBR in the Autumn Statement.

“There are reasons to anticipate further improvements in the Government’s fiscal fortunes. Tentative signs of a pick-up in pay growth will support an expansion in income tax receipts. And January 2015 should see a boost to self-assessment tax receipts relating to income in 2013/14, which was increased by some taxpayers shifting income to take advantage of April 2013’s cut in the 50% rate of income tax.  That said, any gain from the latter source is unlikely to be significant in the overall scheme of things.”

“These figures show that George Osborne is failing on the deficit. He will break his promise to balance the books by next year and is now set to have borrowed over £200 billion more than he planned in 2010.

“Labour will take a tough but balanced approach to get the current budget into surplus and national debt falling as soon as possible in the next Parliament. Our plan will make sensible spending cuts in non-protected areas, fairer choices like reversing the Tory tax cut for millionaires and change our economy so we earn our way to rising living standards for all.

“In contrast the Tories are pursuing an increasingly unbalanced and extreme approach. They have chosen to pencil in even deeper spending cuts, which would return public spending to a share of GDP last seen in the 1930s.

“They are refusing to ask those with the broadest shoulders to make a greater contribution and ignoring the need for a plan to deliver the rising living standards that are vital to getting the deficit down. And they have now made £7 billion of unfunded tax promises, which can only be paid for by even deeper cuts to public spending or another Tory VAT rise.”

Never Been A Better Time To Start A Small Business, Says Ingenious Britain

After all the waiting the Greek elections changed little