• 2014 ended with highest UK confidence levels for over 8 years

Four successive quarterly rises meant UK consumer confidence levels grew five times faster than the global average in 2014 – according to the latest figures from Nielsen, a leading global provider of information and insights.

A score above 100 indicates degrees of optimism – below 100, degrees of pessimism. The score is derived from Nielsen’s Global Survey of Consumer Confidence and Spending Intentions. Established in 2005, it measures attitudes on topics including personal finances and job prospects each quarter among 30,000 internet consumers in 60 countries.

The UK was one of just 11 countries globally reporting double-digit confidence increases across 2014, finishing the year as the 21st most confident country, compared to 30th a year earlier.

• Believing the UK is in a recession dropped 16 points to 55% – the lowest level since the question first appeared in the survey (Q1, 2008)

• Who report changing spending habits to save money dropped 11 points to 54% – the lowest level since the question first appeared in the survey (Q1, 2009)

• Feeling positive about their personal finances rose 2 points to 45% 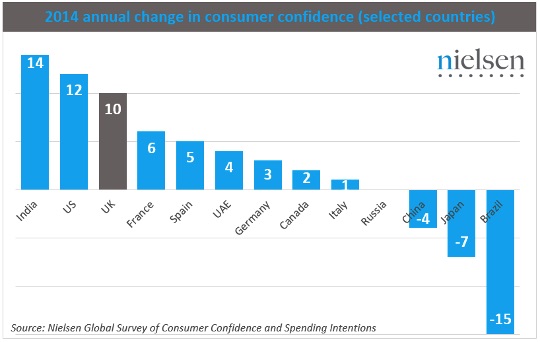 “Although consumer confidence is back to pre-2008 financial crisis levels, with economic indicators improving and people feeling more confident about job prospects, the British shopper is still reluctant or unable to spend,” explains Nielsen’s UK head of retailer and business insights Mike Watkins.

“Most households continue to change their spending to save on household expenses. A quarter of shoppers also claim not to have any spare cash, a constant percentage since the end of the recession. Among those who do have spare cash, almost half would put it into savings, whilst nearly a third will pay off debts.

“However, the most significant change to spending intentions was the increase in households who still intend to switch to cheaper grocery brands even when economic conditions improve – from 37% to 45%. With the discounters now having a 10% share of grocery sales and supermarkets lowering prices, it looks like shoppers will habitually continue to spend less on groceries, even when their personal finances improve.”