Consumer confidence in the UK has risen four times faster than around the world over the last year – according to the latest trend figures from 30,000 consumers released by Nielsen, a leading global provider of information and insights into what consumers watch and buy.

Of the 60 countries measured by Nielsen for consumer confidence and spending intentions, the UK is now 24th, up from 33rd a year ago.

“While much of Europe struggles with consumer confidence, the UK has cemented its position in the continent’s most confident quintile, along with Germany,” says Nielsen’s leader for western Europe Chris Morley. “In contrast, Europe’s other major economies – France, Italy and Spain – continue to be dogged by consumer pessimism, despite some seeing rises in their index from a year ago.

“People in the UK are clearly more positive than they’ve been for some years, which is encouraging for the economy, but it’s perhaps still too early to break out the champagne. Overall, confidence is still in the debit column and there remains an underlying degree of caution in consumers’ minds as to what lies ahead. ‘Cautious positivity’ would be today’s summation.” 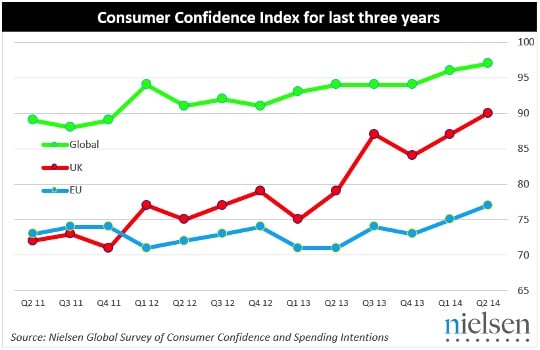 Of the 33 European countries measured in The Nielsen Global Survey of Consumer Confidence and Spending Intentions, only four are more confident than the UK: Denmark (106), Switzerland (99), Germany (96) and Norway (95). One year ago, the UK was the 11th most confident European population; three years ago it was 15th.

A consumer confidence index above 100 indicates degrees of optimism – below 100, degrees of pessimism.

Among the other big five economies in Europe, Germany has increased 4 points to 96 over the last year; Spain is up 6 points to 62; France has decreased 1 point to 60; Italy is up 4 points to 51.

The Nielsen Global Survey of Consumer Confidence and Spending Intentions, established in 2005, measures consumer confidence, major concerns and spending intentions each quarter among more than 30,000 internet consumers in 60 countries.

To show historical trends for the UK and all 60 countries, broken down by metrics such as financial concerns and job prospects, click through to the newly-launched interactive Nielsen Global Consumer Confidence Trend Tracker.

Why Business Start-ups Should Create Their Own Mobile Apps