Consumer confidence in the UK rose for the fifth successive quarter to hit its highest level for nine years – according to the latest figures from Nielsen, a leading global provider of information and insights.

The score is derived from Nielsen's Global Survey of Consumer Confidence and Spending Intentions. Established in 2005, it measures consumer attitudes to topics including job prospects and personal finances each quarter among 30,000 internet consumers in 60 countries.

The Q1 highlights show the number of UK consumers:

• Feeling positive about their job prospects increased for the eighth consecutive quarter to 45% – the highest level for 7½ years (Q3 2007, 50%)

• Believing the UK is in a recession dropped for the eighth consecutive quarter to 51% – the lowest level since the question first appeared in the survey, seven years ago (Q1, 2008) 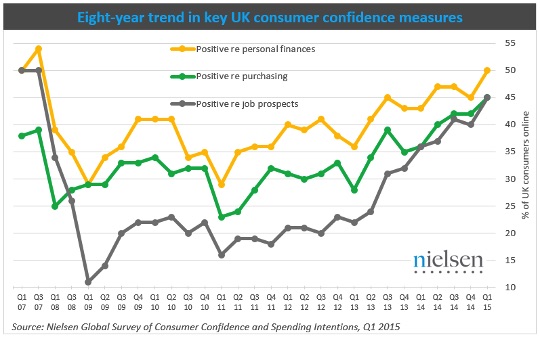 E.g. in Q1 2007, 50% of UK consumers online felt positive about their personal finances

"Consumer confidence in the UK continues to rise. The UK is one of the fastest growing major economies, unemployment is falling and people are benefiting from zero inflation and lower prices in supermarkets and petrol stations,"

"Whilst the majority of people are still cost-cutting – perhaps habitually now – wages, for others, are rising faster than household expenses. This is leading to more optimism about their future spending, so we expect to see confidence continue to rise in 2015."

The Nielsen European Consumer Confidence Index stands at 77. Within the region, Denmark has the highest index (106), Ukraine the lowest (41). Ukraine's is also the lowest globally, among all 60 countries measured, while India's is the highest (130).

What's Happening in This Stock Market Reminds Me of 1999…