UK consumer confidence has risen for the seventh successive quarter to its highest level on record – according to the latest figures from Nielsen, a leading global provider of information and insights.

Furthermore, it’s only the second time the UK Index has been above 100 – a score over 100 indicates degrees of optimism, below 100, degrees of pessimism. The only other time it was in positive territory was in Q1 2006 (101), when Tony Blair was in his third term as PM and the official interest rate was 4.5%. 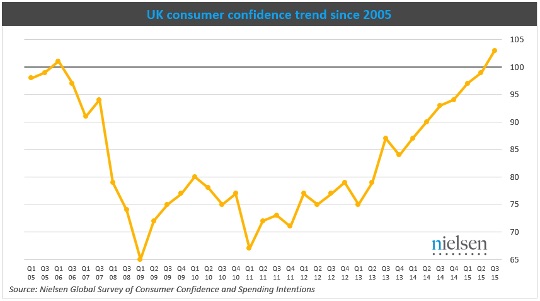 The number of UK consumers positive about making purchases rose 5 points to 49% and positive about their personal finances rose 3 points to 56% – the highest level for both since the questions first appeared in the survey, nine years ago (Q3, 2006).

Britons who say they’ve changed spending habits to save money dropped 5 points to 51% – the lowest level since the question first appeared, more than six years ago (Q1, 2009).

The proportion believing the UK is in a recession stood at 47% – the second lowest level since the question first appeared, more than seven years ago (Q1, 2008).

“Confidence moving into positive territory for the first time in nearly a decade is certainly a landmark moment,” says Nielsen UK & Ireland managing director Steve Smith. “Overall, the UK economy is in better shape than most other European countries, as unemployment rates are down and wage inflation is rising faster than general inflation. Shoppers are also seeing the benefit of lower fuel and energy costs, and households are redirecting spending proportionately to non-food items such as phones, cars and holidays.

“Within food and grocery, the categories with the strongest volume growth continue to be the more ‘expandable’ categories of beverages, confectionery and snacks, which are typically driven by promotions and branded innovation.”

The global Consumer Confidence Index stands at 99, while Europe’s is 81. Germany – Europe’s largest economy – is at 100. The UK is Europe’s second most confident country, behind Denmark (109). India (131) has the highest score globally, followed by the US (119).

The scores are derived from Nielsen’s study, established in 2005, which measures attitudes each quarter on topics including personal finances and job prospects among 30,000+ internet consumers in 61 countries.

Regulators clamp down on pension loans