April has seen another slide in UK consumer confidence according to a key indicator.

The GfK NOP Consumer Confidence Index has fallen three points this month to -31. This index has only been below -30 twice before in its over 30 year history, early in 1990 ans in mid 2008.

Not only that, April has seen a fall in all five of the GfK NOP confidence measures that make up the overall barometer index.

Overall the research carried out by GfK NOP (www.gfknop.com/pressinfo/releases/singlearticles/007832/index.en.html) on behalf of the European Commission shows a worrying trend.

According to Nick Moon the MD of GfK NOP "It is particularly striking that all five areas of the Index fell this month, pointing towards growing gloom as we head into summer. These figures must make the possibility of a double dip recession increasingly real.”

The climate for major purchases measure dropped two points on the month from -29 to -31 and is eleven points lower than April last year.

They also run a 'now is a good time to save' index, which has also decreased and now stands at -8, four points lower than March and one point less than last year. 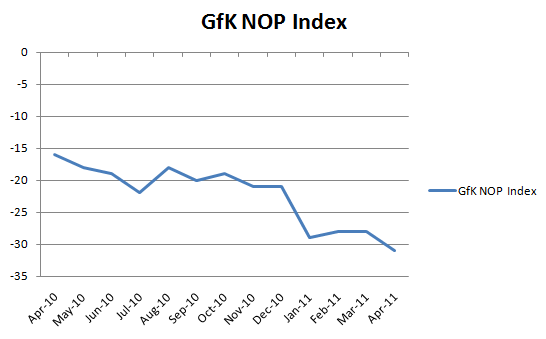 Euro firmer in early trading ahead of the Merkel-Sarkozy talks