UK overtakes Germany for first time in over 5 years, now second most confident nation in Europe behind Denmark

Consumer confidence in the UK rose for the sixth successive quarter to surpass the global average for the first time in more than nine years – according to the latest figures from Nielsen, a leading global provider of information and insights.

The UK also overtook Germany (which dropped from 100 to 97) for the first time in more than five years (since Q1 2010 – 80 vs. 74). Consumers in the UK are now the second most confident in Europe, behind Denmark (112) – the fourth most confident country globally. 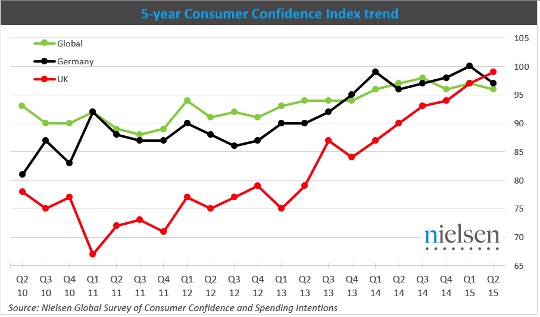 A score above 100 indicates degrees of optimism – below 100, degrees of pessimism. The score is derived from Nielsen’s Global Survey of Consumer Confidence and Spending Intentions. Established in 2005, it measures attitudes each quarter on topics including job prospects and personal finances among 30,000 internet consumers in 60 countries.

Greece had the largest quarterly decrease in confidence among the 60 countries – down 12 index points to 53.

Other highlights from the study show the number of Britons:

• Feeling positive about their job prospects increased for the ninth consecutive quarter to 49% in Q2 2015 – the highest level for nearly eight years (Q3 2007, 50%)

• Feeling positive about their personal finances increased for the second consecutive quarter to 53% – the highest level for nearly eight years (Q3 2007, 54%)

• Believing the UK is in a recession dropped for the ninth consecutive quarter to 45% – the lowest level since the question first appeared in the survey, over seven years ago (Q1, 2008)

• Feeling that now is a good time to make purchases dropped 1 point to 44% – but still the second highest level since the question first appeared in the survey, nearly nine years ago (Q3, 2006)

“Consumers in the UK are feeling ever more confident. Wage inflation is starting to outstrip price inflation for the first time in years, while mortgage rates are at historically low levels and unemployment has generally been falling.

“This positivity is reflected in the cornerstone of household budgets: grocery spending. The number of UK consumers switching to cheaper grocery brands in order to save money is at its lowest level (30%) since late 2009. This is an encouraging sign for retailers that consumer purse-strings may be starting to loosen.”

The Consumer Confidence Index for Europe stands at 79. Denmark has the highest index (112) in Europe, Ukraine the lowest (48). Globally, among all 60 countries measured, South Korea has the lowest index (45), India the highest (131).

Record amount of extra tax recovered from big ticket avoidance, evasion and fraud by HMRC's top team of specialist investigators – up 23% in a year

Iran too bitter to sell