While Greece is having austerity forced on it the UK consumer has decided on a self imposed regime of austerity.

The effects of this can be seen on the high street as TJ Hughes and Habitat go into administration and others such as Thorntons, Carpetright and Comet shut stores down to save costs.

The fears of consumers over jobs, rising prices and taxes has dampened their appetite for spending leading to stores falling profits. This of course leads to companies failing and shops shutting putting more people out of work so completing a sort of self fulfilling prophecy.

While this is going on the coalition government is busy setting about public sector cuts that will put more people out of work as well as withdrawing work from those that supply goods and services to the public sector.

So the downward spiral tightens.

The government says it is keen to get the deficit down to limit interest payments that threaten to gradually bleed the country dry. And in the long term this is the best thing to do says the government.

But the deficit is not the actual debt mountain. Any form of deficit will continue to pile more debt onto the already huge amount we owe.

One look at the general government gross debt and the Treasury projections to 2015 shows that far from government debt decreasing, it will continue to rise quite steeply throughout this parliament. 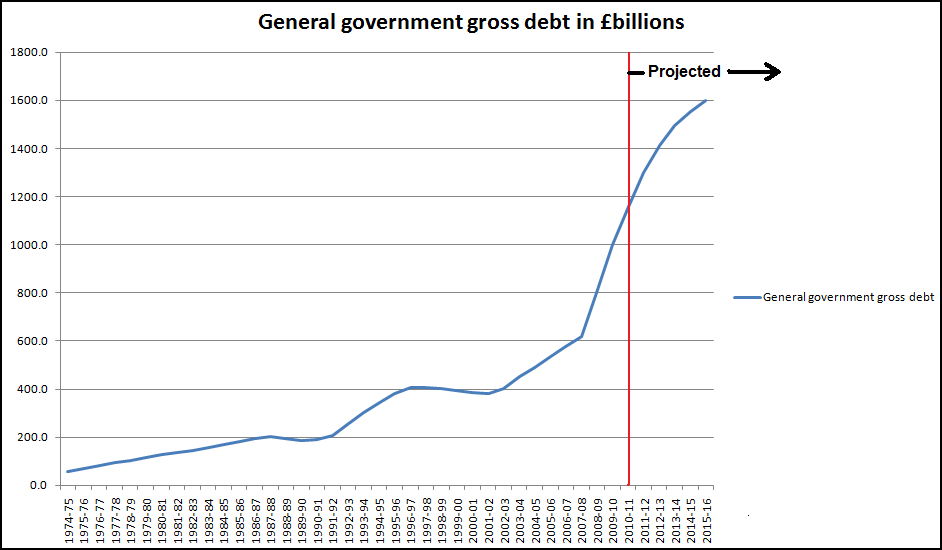 So, while the average person on the street is suffering a reduced standard of living or even losing their livelihoods (if not the roof over their heads), one has to ask ‘where is all this money going? In whose pocket will it end up?’

Why consumers need to feel the pinch