The UK Consumer Prices Index (CPI), rose by one percent in the year to September 2016. This was an increase on the previous month’s increase of 0.6 percent.

This is the highest that the official rate of inflation has been since November 2014, when it was also one percent says the ONS.

Rising prices for clothing, overnight hotel stays and motor fuels were the main upward drivers, with prices for gas remaining unchanged despite having fallen a year ago.

These were partially offset by falls in air fare and food prices.

The measure for inflation that takes account of homeowner/occupier costs (CPIH) rose by 1.2 percent in September and increase on the 0.9 percent seen in August.

One point to note is that, before people run around blaming Brexit, it has to be remembered that it is government policy through the Bank of England that the target figure for inflation is two percent. 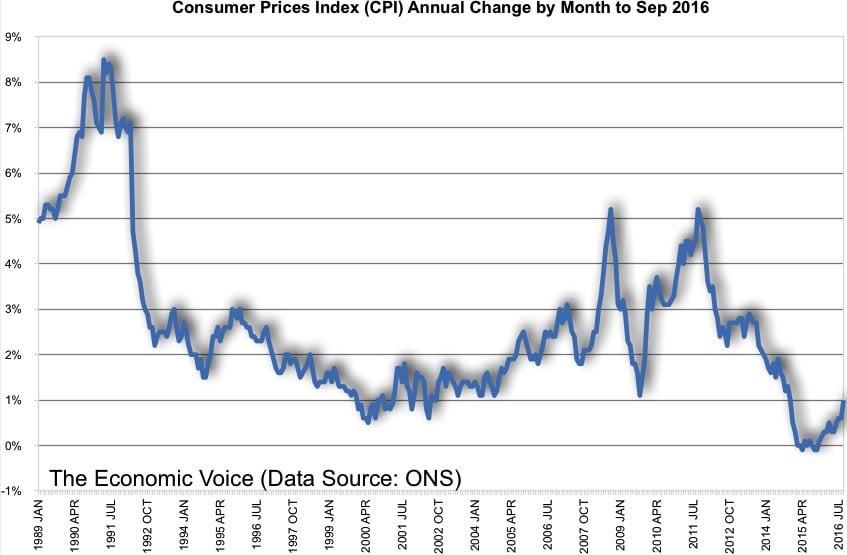 “CPI inflation in September recorded its highest reading since November 2014. Today’s rise is likely to mark the beginning of a steep upward trend which will drive the CPI measure up to – and then above – the MPC’s 2% target in early-2017.

“The pickup was largely due to base effects, with last autumn seeing the peak of the drag from falling food, petrol and energy prices. However, there is evidence that inflationary pressures are also beginning to intensify. Petrol prices rose by 1.2 pence per litre on the month, while there are signs that core inflation is beginning to accelerate. We calculate that on a seasonally adjusted basis, core inflation was up 0.7% quarter-on-quarter in Q3, the strongest outturn since the end of 2012.

“The pickup in core inflation is likely to have been heavily influenced by the pass-through of the depreciation of sterling that we have seen over the past year. These pressures are likely to intensify over the coming months, particularly as the impact of the post-referendum sterling slump begins to be felt.”

“Working people have just endured the longest wage squeeze since Victorian times. But it seems another one is just around the corner.

“The government has a chance in the Autumn Statement to make sure workers don’t pay the price of the vote to leave the EU. Ministers must support the economy and jobs by boosting spending on roads, railways and homes. And make sure that the lowest paid get a pay rise through increasing the national living wage.”

“The September inflation print is a confirmation that the long period of low inflation is over, with year-on-year CPI increasing to 1% from 0.6% in August. The combination of higher input prices -rising 7.2% in September and a higher oil price is likely to put some upward pressure on future inflation prints in the coming months. Governor Carney’s comments last week are however a confirmation that the BoE will not react to the data, as it continues to view the currency’s fall as a shock absorber to the uncertainty created by the Brexit vote.”

“Typically higher inflation would be good for a currency as it would persuade a central bank to become more hawkish when setting interest rates. Under normal circumstances you would have seen Sterling rally by over a cent on today’s biggest increase in inflation in two years.

“But the reality is that UK economic conditions post-Brexit are far from normal. The worry is that despite today’s sharp rise in inflation and one-way expectations for the foreseeable future, the Bank of England will still consider cutting interest rates to protect economic growth and employment.

“Sterling briefly touched a six-day high of $1.2272 after the UK inflation release this morning. But the muted rally and on-going signs of stress in UK Gilts shows you just how nervous the market is about the outlook for the UK economy and the BOE’s next policy move on 3rd November.”