The annual inflation in the Consumer Prices Index (CPI) reached 2.9 percent in May, an increase on 2.7 percent in April.

When factoring in homeowner/occupier costs (OOH) the the 12 month inflation rate of CPIH was 2.7 percent, up from the 2.6 percent seen in April.

“Rising prices for recreational and cultural goods and services (particularly games, toys and hobbies) was the main contributor to the increase in the rate”, said the ONS, continuing “There were smaller upward contributions from increased electricity and food prices. These upward contributions were partially offset by falls in motor fuel prices, and air and sea fares, the latter two influenced by the timing of Easter in April this year.” 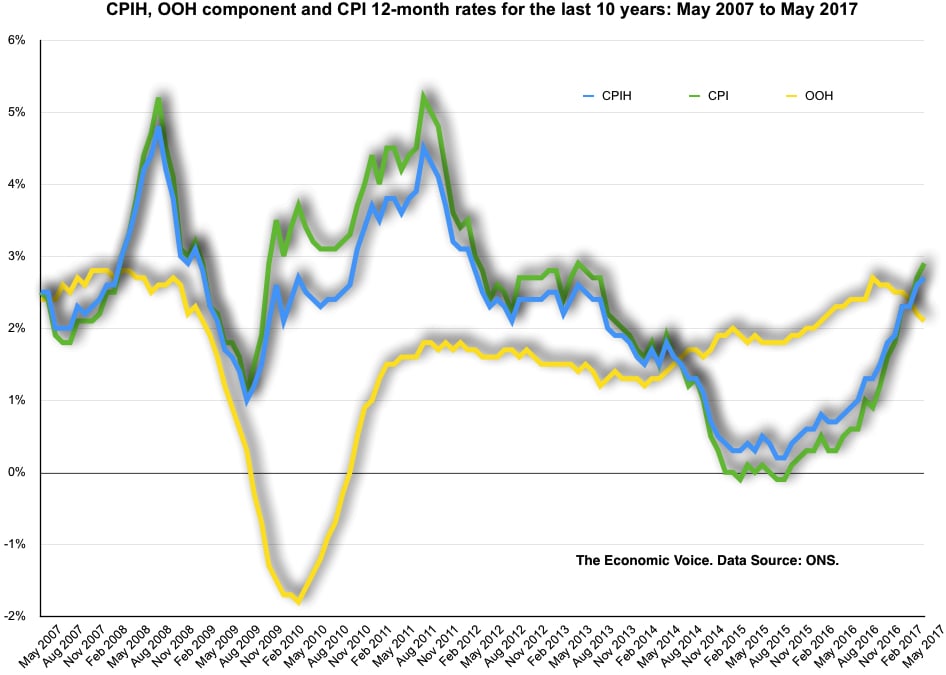 Commenting on this Michael Baxter, Economics Commentator for The Share Centre said:

“UK Inflation rose to 2.9% in May, a four-year high. More worryingly, core inflation – with energy, food and tobacco stripped out – also rose, to 2.6%.

“When setting monetary policy, the Bank of England often pays more attention to core inflation than the headline rate.

“The UK is suffering a double blow – inflation is rising for the same reason it is elsewhere, namely related to higher commodity prices – but the fall in the pound has been exerting extra pressure.

“The commodity effect is a one-off, and indeed the oil price has settled down at a level that is low compared to a few years ago. We are already seeing signs of this effect reversing in the US and euro area.

“But, while the currency effect will not last forever, the experience of the post 2008 period shows that it can take several years before a fall in sterling stops influencing the inflation rate.   However, the falls in sterling, especially against the euro, have not been as great as post 2008, and until recently, the drop in sterling after the Brexit vote had been partially reversed.

“But sterling has fallen sharply since the UK election, and unless this fall reverses, we may see another currency related jump in inflation, a few months down the line.

“Despite this, the markets are not expecting the Bank of England to react by increasing interest rates. In fact, the yield on UK government bonds has been falling of late, with the yield on ten years dropping below 1% a few days ago, and for the first time since last autumn.

“For now, the big hit arising from the jump in inflation will be on real earnings.  The rise in the cost of living is beginning to hurt consumers – which will be negative for companies that target the domestic economy.”

"The fall in the pound and market uncertainty since the Brexit vote are already squeezing people's incomes across the country.

"This will only get worse unless Theresa May abandons her plans for an extreme, UKIP-style Brexit, outside the single market and customs union.

"There is now a new mood in Parliament and amongst some ministers to look for a compromise that will protect our economy and living standards.

"The Liberal Democrats will be constructive partners in any dialogue to ensure Britain gets the best possible deal in the years ahead."

“The election showed that working people are struggling. And the biggest price rises in four years won’t provide any comfort.

“Working people are still £20 a week off worse, on average, than they were before the crash – and now rising prices are hammering their pay packets again.

“The new government must stop the real wage slide. Ministers must focus on delivering better-paid jobs all around the UK.

“And it’s time to lift the artificial pay restrictions in the public sector. Our hardworking nurses and teachers are long overdue a pay rise.

“The figures showed that UK real wages will fall by 1.1% in 2018 – putting the UK and Finland at joint-bottom of the league for wage growth among OECD countries.”

“The sustained weakness of sterling and resulting increase in energy and food costs pushed inflation to a four-year high in May and it’s no surprise that consumer spending has taken a hit, with the latest figures showing a fall for the first time since 2013. As long as inflation exceeds wage growth, I don’t see the consumer caution disappearing anytime soon, especially as we’re now faced with yet more political uncertainty.

“Despite the high level of inflation, the Bank of England is unlikely to provide any relief to savers when they make an announcement on interest rates later this week. With this in mind, consumers need to start planning ahead and investing to mitigate the effects of inflation. This means investing in products that have a strategy that aims and with the sole purpose of generating returns in excess of inflation, putting both their savings and investments on the path to financial wellness.”

“For the fourth month in a row inflation has exceeded the Bank of England’s 2% target. This high rate will particularly affect the purchasing power of retirees locked into a fixed income, and the growing number whose wages have failed to keep pace. Equity markets in general look highly valued at present, while bond yields remain unattractive. This limits the options available to generate inflation-plus returns. Diversification continues to be the most considered long term approach, with a focus on lower volatility equity dividends.

“Coupled with recent increases to the US central rate, high inflation also means pressure continues to mount on policy makers to tighten fiscal policy. Such action is likely to be delayed temporarily as post-election political uncertainty – and the related Sterling falls – both settle. The prospect of a ‘softer’ Brexit from a minority Conservative government may give the market stability required for an interest rate increase later in the year.”

“Inflation is slowly squeezing household finances at a time when wages are failing to rise at the same rate. Even if take-home pay is increased, it can be all too easy for inflation to eat away at income, meaning that daily spending itself takes a hit – let alone building up a long-term safety net. That said, it can be managed. Taking a bit of time to look at overall outgoings will help to keep this in check, allowing you monitor what you can immediately afford and how much you can put aside each month. Regular, small amounts make a real difference, and ultimately you will have peace of mind that you have something to fall back on when it matters.”

“Inflation was pushed up in May by higher prices for holidays abroad as a result of sterling’s earlier sharp drop. There was also upward pressure from recreational and cultural goods (notably computer games), food prices and higher utility bills as more of the “big six” energy suppliers lifted their tariffs. Prices for clothing and furniture & household goods also rose.Inflation was prevented from rising further in May by lower motor fuel prices and by an unwinding of Easter-related price hikes in April, notably for air and sea fares.

“Inflation looks set to breach 3% in June and it is likely to peak at around 3.2-3.3% in the second half of the year as sterling’s past slump is unlikely to have fully fed through yet. However the risk of inflation going markedly above 3% looks to have been diluted for now at least by sterling firming from its early-2017 lows and oil prices softening. Some signs of a limited easing back of inflationary pressures further down the price chain came from the annual increase in producer input prices moderating to a still considerable 11.6% in May from 15.6% in April and a peak of 19.9% in January. The annual increase in producer output prices stabilised at 3.6% rising by a modest 0.1% month-on-month.

“Much could depend upon how sterling performs over the coming months and whether or not it comes under serious renewed downward pressure from heightened UK political uncertainties.

“Inflation of 2.9% in May will almost certainly have been above pay growth, thereby resulting in a further drop in consumers’ real earnings. With inflation likely to move above 3% over the coming months and earnings growth looking unlikely to pick up in the near term at least, there could be more pain to come for consumers.

“The Bank of England will be far from happy with inflation rising to 2.9% in May but it remains odds-on that the MPC will continue to look through the inflation overshoot and leave interest rates unchanged on Thursday following their June meeting. Indeed, the case for caution has been magnified by the economic risks of increased political uncertainty. It looks ever more likely that the Bank of England will hold off from raising interest rates until 2019.”

“There is cause for concern here because wage growth is lagging behind these price increases, putting a squeeze on households across the country. There’s a strong risk that this could reduce consumer spending, which has been one of the biggest drivers behind the UK economy in recent years. So it’s particularly worrying that these price increases are all in consumer-focused areas.

“It’s not just consumers who are feeling the pinch: these price increases will affect small businesses too. IPSE’s Confidence Index shows that freelancers have been getting more and more concerned by rising input costs over the last 12 months.

“Let’s not panic just yet though. The Bank of England expected inflation to reach around this level by the end of the year: the increase has just come more quickly than they anticipated. They’ve therefore said they won’t try to combat the inflation increase: both because the current level isn’t far off their target and because increasing interest rates at this point could actually do more damage to the economy. IPSE strongly agrees with this, and urges the Bank to hold this position and continue providing clear guidance to businesses and households alike.”

“The triple-lock ensures pension incomes go up with inflation, earnings or 2.5%, whichever is higher. It means that state pension incomes are hard-wired to grow ahead of  pay.

“In their manifesto, the Conservatives pledged to move to a double-lock, which would see pensions rise by earnings or inflation. They were the only party to commit to ending the triple-lock and the policy was designed to dampen the ratchet-effect of underpinning pension increases by 2.5%.

“But with inflation pushing beyond that level, there is no saving to be made by moving to a double-lock. With inflation running at greater than 2.5%, both the double and triple-lock would cost the same.

“Over the longer term, retaining a triple-lock on state pensions will still mean future spending on retirement benefits will rise significantly. But in the immediate term, it means the Conservatives could concede ground on their double-lock policy with relative ease, making it an obvious concession in their current negotiations with the DUP.

“Over the long term, both the triple and the double-lock will see state pension spending increase. Even a double-lock would result in a £30bn increase over the next half-century, according to the Institute for Fiscal Studies.

“If there is no departure from the triple-lock it will ultimately place more pressure on future governments to address the state pension age. Preventing people from accessing a state pension until later in life is the alternative means of reducing the future cost of retirement benefits.”