After falling against peers like the Euro and US Dollar last week as the UK’s latest employment figures disappointed expectations, the British currency staged an impressive rebound on Tuesday. The Pound topped the 1.42 level against the Euro and advanced beyond 1.57 against the ‘Greenback’ after the UK’s Consumer Price Index unexpectedly climbed to 0.1% in July. The annual figure had been forecast to hold at 0.0% so even this modest rise was enough to inspire a Sterling rally. If this week’s UK retail sales report also delivers a pleasant surprise and adds to the case in favour of the Bank of England (BoE) increasing interest rates at the turn of the year, the Pound could push higher still before the weekend.

On Friday the Euro experienced modest movement as the terms of the Greek bailout were approved by both the Greek parliament and Eurozone finance ministers. While this took the Hellenic nation a step closer to accessing vitally needed emergency funding, demand for the common currency was stilted as GDP data for the Eurozone and several of its largest economies fell short of forecasts. As a new week of trading began the Euro barely reacted to the news that the Eurozone’s trade surplus widened substantially in June as investors focused on Wednesday and the German vote on Greek funding. Although the Eurozone’s largest economy is expected to approve the measures, any delay to proceedings would weigh on the Euro. If Greece is unable to receive the first instalment of its bailout in time to make a repayment to the European Central Bank (ECB) we may see the common currency tumble.

Last week’s surprise currency intervention from the People’s Bank of China (PBoC) ignited concern that the Federal Reserve might refrain from adjusting borrowing costs due to the slowdown in China having an adverse impact on the nation’s economic outlook. The US Dollar accordingly softened against several of its peers. However, a sturdy US retail sales report bolstered Fed rate hike expectations once more and the ‘Greenback’ recouped losses. Should this week’s major US reports, the nation’s inflation figures and minutes from the last Federal Open Market Committee (FOMC) policy meeting, keep hopes of a September adjustment alive, the US Dollar could end the week trending in a broadly stronger position.

The People’s Bank of China (PBoC) devalued the Chinese Yuan by around 5% in the space of three days last week. The surprising course of action initiated widespread currency market movement and inspired a sell-off in commodity-driven and emerging-market currencies. The ‘Aussie’ fell despite recent commentary from the Reserve Bank of Australia (RBA) leading to hopes that the central bank’s rate cutting cycle might be at an end. This week Chinese concerns continue to impact Australian Dollar demand, but the direction the South Pacific currency takes will also depend on US news. If data from the world’s largest economy paves the way for the Fed introducing higher interest rates, the ‘Aussie’ could hit new lows against counterparts like the Pound and US Dollar. 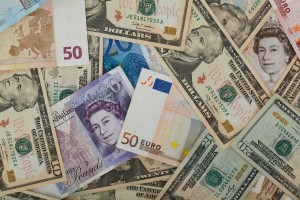 Like its Australian peer, the New Zealand Dollar was badly affected by the action taken by the People’s Bank of China (PBoC) last week. Domestic concerns, such as floundering dairy prices and below forecast retail sales data, left the ‘Kiwi’ struggling. While hopes that dairy prices might start to climb after hitting rock bottom gave the New Zealand Dollar a bit of a boost at the start of this week, the latest shift in Chinese sentiment and the prospect of vaguely hawkish FOMC minutes saw the currency swiftly reverse gains.

At the beginning of this week commodity price shifts, risk appetite and news from nation’s like the UK and US dictated the direction taken by the Canadian Dollar. Both the CAD/GBP and CAD/USD currency pairs faltered as investors considered the diverging policy outlooks of the Fed, BoE and Bank of Canada. While the Fed and BoE are starting to prepare markets for higher interest rates being introduced in the near future, the Bank of Canada may have to slash rates further in order to counter the impact of plummeting crude oil prices. The week’s main Canadian reports, inflation and retail sales numbers, are both due for release on Friday and can be expected to trigger notable ‘Loonie’ movement.