PSNBX stood at £25.1 billion in June, which is 1.4 percent of gross domestic product (GDP).

“Today’s figures mean that the public sector deficit has now fallen in each month of 2015 with another month of strong growth in tax receipts boosting the UK’s fiscal position.

“Total central government receipts were up 4% year-on-year, with VAT receipts surging by almost 7% and revenues from PAYE up by 3.1%. The picture for public spending was less favourable, with outlays by central government rising by 2.9% on an annual basis, the strongest rise since last August. But as the £3 billion of in-year spending cuts announced by the Chancellor in June take effect, this growth should moderate. 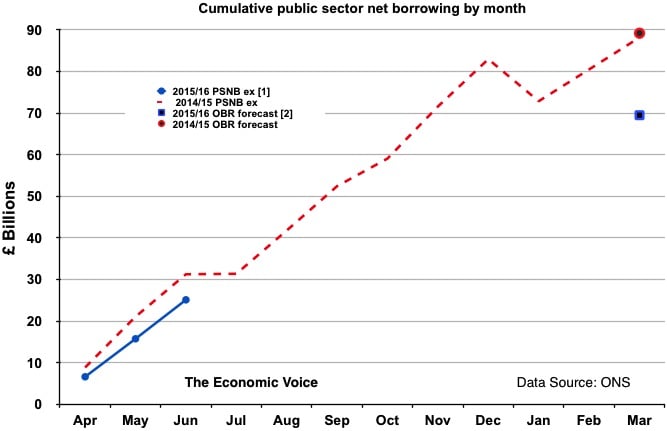 “Admittedly, June’s deficit was above the consensus expectation of £8.9 billion, while the drop in borrowing compared to June 2014 was a relatively modest 8%. This compared with year-on-year drops of 25% in both April and May. But the fiscal year to date suggests that the underlying picture remains favourable. The OBR’s July Budget forecast revised down borrowing for this year from £75.3 billion to £69.5 billion – a fall of 22%. But borrowing in the first three months of the fiscal year ran at 24% below the level in the same period in 2014/15. So while early days, the OBR’s full-year forecast may prove to be a tad optimistic.

“Looking forward, a falling deficit won’t save departmental spending from further cuts, the details of which are due to be set out in the Spending Review on 25 November. But if, as we expect, the underlying strength of the economy proves to be more robust than the OBR thinks, the modest relaxation of austerity presented in the Budget may prove to be the beginning of an easing trend.” 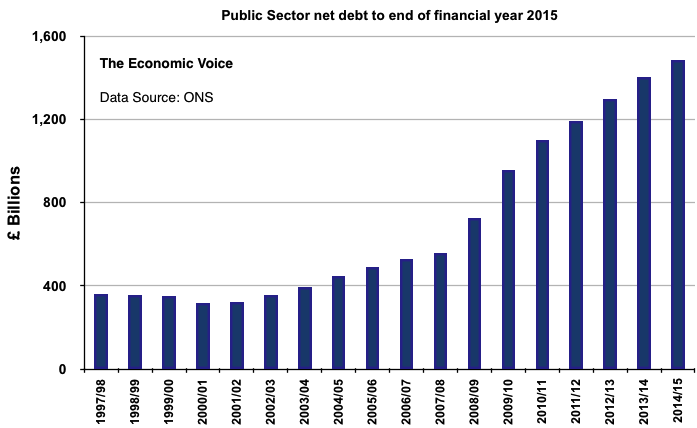 “Under this Chancellor the national debt has soared and he has failed to build a more productive economy based on higher living standards and better wages.

“As the OECD has warned, ‘continued weak productivity’ could lead to a higher deficit yet the Budget saw productivity revised down next year and for three years after that.”

“The Chancellor keeps shifting the goal posts on government borrowing, but over this financial year he is expected to borrow three and a half times more than expected to bail out his failed economic plan – that’s £70 billion instead of £20 billion.

“After the longest recorded squeeze on living standards, income tax revenues and national insurance receipts are still way down on expectations. With interest rates on government borrowing at rock bottom, this is the perfect opportunity for the Chancellor to invest in skills, infrastructure and much-needed affordable housing. But rather than learning from his mistakes the Chancellor cut back on infrastructure spending in last month’s Budget.

“We need a better plan for sustainable high-productivity growth that will deliver the quality jobs and decent services working people need.”