The latest update for the first quarter of 2012 from the Office for National Statistics has amended the fall in GDP from 0.2% to 0.3%. And coming on the back of the GDP fall in the last quarter of 2012 this just puts us a little further into the mire of a double dip recession.

This will of course come as a blow to the Chancellor, George Osborne, and Ed Balls, the shadow Chancellor, was quick to gleefully point out the errors of the coalition’s austerity plan.

The first is the Daily Telegraph reader approach – someone else must suffer to get the debt down so that we can get the economy back on track.

The second is the Guardian reader approach – someone else must pay to enable us to spend our way out of recession.

But you notice that in both scenarios the person that does the suffering / paying is always ‘someone else’.

There seems to be no reference to ‘we’, apart from the government telling us that ‘we’re all in this together’ and then putting policies in place that show anything but.

And Labour is no different just wanting to target certain unpopular sectors for a large tax whacking.

In both of these approaches it’s all about ‘us’ hitting ‘them’ where it hurts and in reality that’s what our politics is all about. 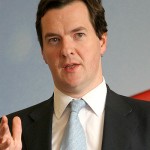 But when you look at the differences being offered by government and opposition you see that there’s barely a cigarette paper of difference between them. Had Labour got into office then we’d still be seeing cuts and angry public sector workers and, for all its ‘austerity’, the coalition has still had to add another Â£120 billion or so to the ever mounting public debt pile this year. Despite their bluster to the contrary the main parties are in virtual lockstep in real terms.

That for me means more of the same; more debt and even more disappointing GDP numbers until something really gives. Then we’ll find out who the winners and losers really are and I would bet that they would be just about the same people and organisations whoever had the reins of power.

Cash ISAs are a £4bn loss to savers