Listen to government rhetoric and you’d be led into believing that the UK economy was steaming ahead.

But the latest data from the Office for National Statistics (ONS) tells a different story; especially when coupled with a few things that people tend to forget about.

The ONS has just revised its recent UK economic growth in volume estimates between Quarter 2 (Apr to June) 2015 and Quarter 3 (July to Sept) 2015 down by 0.1 percent to 0.4 percent.

There is also the matter of growth in GDP per head, which is still disappointing at only 0.3 percent when compared to 0.7 percent in 2013 and 0.5 percent in 2014. According to the ONS, GDP per capita has crept up in recent years and does now exceed that just prior to the credit crunch. Remember though that the population grew by nearly half a million last year to 64,596,800 alone, which may go some way to explain the slow rate of increase, but the data does not include the estimated illegal immigrant numbers. But also consider that UK GDP calculations now include such things as the illicit trade in drugs.

So that means that the government can point at the figures and get the benefit of inflated by crime GDP figures. But, if the higher population numbers were also included it would knock back the GDP per head figures – not so good for those who claim firstly that the economy is on the mend and secondly that immigration has saved us from ruin. 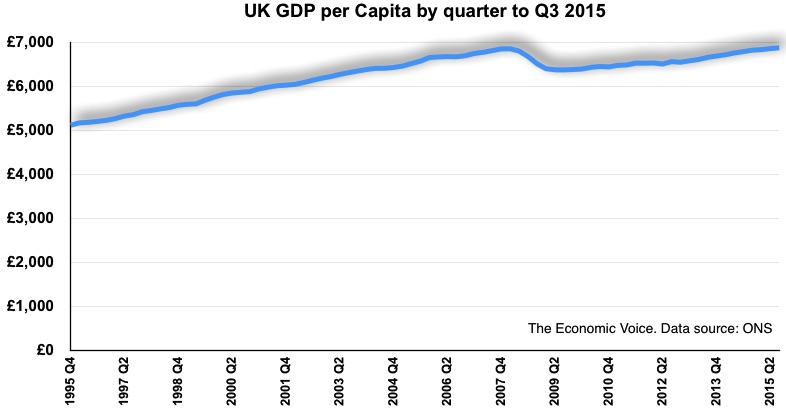 “The revisions to the GDP data mean that 2015 looks set to be a relatively disappointing year for the UK economy. GDP is likely to grow by just 0.6% in Q4, which would leave growth in 2015 as a whole at 2.2%. Given the extent to which the economy has benefitted from very low inflation and the degree of spare capacity, this should really have been a year where the economy grew in excess of 3%. However, recent experience suggests that we should not write off 2015 just yet, given the clear tendency for the GDP data to eventually be revised up over subsequent years.

“Surprisingly, the third estimate for Q3 showed quarterly GDP growth has been revised down again. The most notable down grade was Q2, which has been revised from 0.7% to 0.5%. The new data today suggests that the economy has less momentum than was previously thought, and year-on-year growth is now estimated to have been 2.1% in Q3, rather than 2.3%.

“The expenditure breakdown largely confirmed the picture painted by last month’s release; that growth in Q3 was driven exclusively by the domestic economy aided by a strong consumer sector. The trade and inventories data looks exceptionally volatile from quarter-to-quarter, raising sizeable question marks about its reliability. We have now had six quarters of alternating, large, positive and negative contributions to GDP growth from net trade.

“However, on a more positive note, the weaker trade performance in Q3 did not result in a widening of the current account deficit; indeed, it actually narrowed from 3.8% of GDP in Q2 to 3.7% in Q3. This was mainly due to a further decline in the deficit on primary income. This component has been largely responsible for the deterioration in the UK current account in recent years, so the fact that the deficit has narrowed to its smallest level in nine quarters should quell the concerns of some commentators that the overseas deficit represents a major source of risk for the UK economy. Furthermore, we expect the primary income deficit to narrow further as our key trading partners enjoy a stronger run of economic growth and, therefore, UK investments in those markets perform better.”

IFAs caught out by cut down CGT changes