The UK economy grew by 0.8 percent in quarter one of 2014 following on from the 0.7 percent seen in the final quarter of 2013 according to the latest figures from the Office for National Statistics (ONS).

Although the bad weather of January and February may have had some impact on the construction sector, the ONS said it was not significant enough to call the storms a ‘statistical special event’ that would require them to adjust the data accordingly.

Looking at the four main sectors of the economy:

• but agriculture output decreased by 0.7 percent (weighting on GDP 7)

“The economy is motoring ahead with progress across many sectors as confidence continues to build among businesses and consumers.

“Growth in the first quarter was mostly driven by the service sector, but we’re also seeing our industrial base playing an important role in the recovery, with manufacturing output rising steadily.

“We expect economic momentum to be maintained throughout the year with a broader-based recovery as business investment takes off.”

“Recent robust monthly indicators had raised our expectations for UK economic growth in Q1. But today’s GDP numbers, while impressive by historical standards, have left us a little deflated. GDP growth in Q1 came in slightly below the market consensus of 0.9% and the Bank of England’s expectation of 1%, while total output still remains below pre-crisis peak.

“But there is plenty of good news to take away from today’s numbers. The economy has now experienced five consecutive quarters of growth and there is the potential for Q1’s growth to see an upward revision. Meanwhile, the data points to a recovery that is broad based – Q1 saw output in services, industry and construction all expand in excess of 3% on an annual basis.

“That said, the risks have not gone away. Given the continued rapid growth in house prices, further expansion in GDP could become excessively dependent on the housing market. However we are expecting a long period of low inflation expansion which should keep interest rates on hold this year, supporting households’ incomes and spending. The pace of expansion should also give firms even more confidence to invest.

“So we are sticking to our view that the economy will expand by 2.9% in 2014 as a whole, with GDP overtaking its pre-crisis peak in the next quarter. A shift from economic recovery to expansion shouldn’t be too long coming.”

Simon McVicker, the director of policy and public affairs for PCG (the representative body for freelancers and independent professionals), said:

“The Chancellor said this morning that ‘Britain is coming back’ and the figures certainly show that things are looking up for our economy. We should be mindful however that it will take time for these positive conditions to filter right the way down to the UK’s smallest businesses.

“Our own Economic Forecast showed that over two thirds of independent professionals saw no change in their business during the first quarter of 2014, indicating that most have yet to feel the benefits of the economic recovery. There is no doubt that Britain is on the right track, but in order to ensure every British business benefits no matter its size, the Government must keep the momentum going.”

"GDP expanded 0.8% in Q1, a touch below market expectations of a 0.9% gain. Nevertheless, it was the fourth consecutive quarter of robust growth, taking the YoY rate up to 3.1% – the highest since 07Q4. The pace of that recovery over the last year has been far stronger than anticipated: in their February 2013 Inflation Report for example, the BoE expected YoY GDP growth in 14Q1 to be around 1.6%, attributing only around a 15% chance to it being 3% or more. Nevertheless, the level of real GDP is still around 0.6% below its pre-crisis peak. On that metric, the UK climbed above the Euro area around a year ago, though is still a touch short of France." 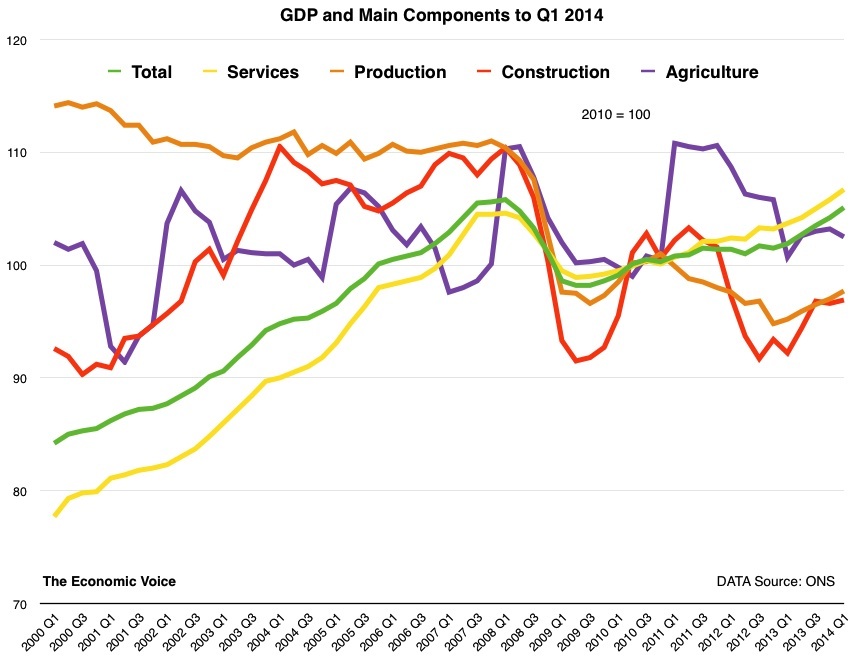 Examination of Business Rates Welcomed by the British Property Federation