UK economic output is estimated to have increased by 0.5 percent in the third quarter (July to September) of 2015, compared to growth of 0.7 percent in the quarter two (April to June), says the Office for national Statistics (ONS).

Three of the four main industrial grouping saw growth during quarter three; services increased by 0.7 percent, production by 0.3 percent and agriculture grew by 0.5 percent. But the fourth main sector, construction, saw a decrease in output of 2.2 percent. 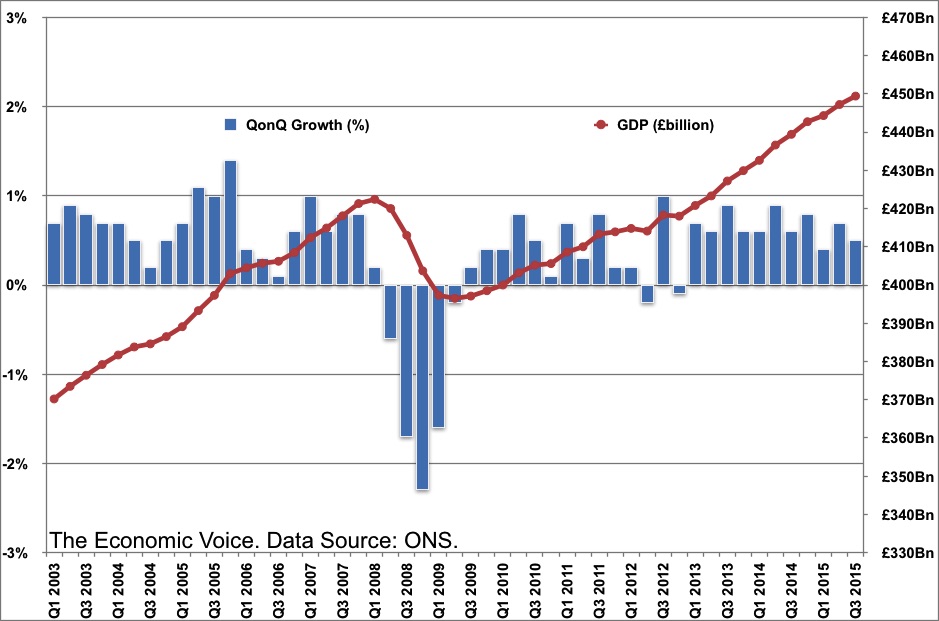 "Growth has slowed a little, but there is no real reason for new concern over the prospects of the UK economy. It is still the same main culprit weighing on momentum – manufacturing – which has been hampered by combination of a stronger currency and global headwinds. Construction too, disappointed, although it has less of an impact on the overall figures.

But there are also reasons for optimism. Monetary policy looks set to remain accommodative, while the long-term strengthening of the labour market will continue to buoy the UK's economy, and underpin already strong domestic consumer spending. The service sector is thriving, and it will continue to support to the UK's economic growth. If we were to see manufacturing follow suit, we'd see the economy begin to fire on all cylinders. For investors, defensive companies most exposed to discretionary spending are well placed to take advantage of current conditions."

"The preliminary estimate of UK GDP for the third quarter showed economic growth slowing to 0.5% quarter-on-quarter compared to 0.7% in the previous quarter. Consensus expectations were for a small slowdown to 0.6%, but the latest figures disappointed as the manufacturing sector struggles with a strong pound and subdued external environment.

"Within the details of the GDP report, the recession in the manufacturing sector continues with activity contracting by 0.3%. The wider measure of industrial production did however grow by 0.3% thanks to a pick-up in mining and quarrying activity. The services sector grew by 0.7%, as strong retail sales maintained solid growth in distribution, hotels and restaurants. Business services also posted strong growth of 1%. Finally, the construction sector contracted by 2.2%, taking the level of activity back to levels not seen since the second quarter of 2014.

"The slowdown in UK growth is by no means a disaster, but it will put pressure on the Bank of England to delay the first rate hike, especially as inflation remains in negative territory. We continue to forecast no change in interest rates until May 2016. The slowdown in growth presents an even bigger challenge for the Chancellor as he prepares to find a way to implement substantial fiscal tightening over the course of the next few years. Moreover, the success of the introduction of the new living wage hinges on the strength of the economy to absorb the increase in labour costs. If the economy slows further, the government's policy may cause unemployment to rise once again, making cuts to tax credits even more painful."

"Softer growth in the third quarter does not portend a substantial prolonged slowdown in the UK, in our view. GDP rose 0.5% qoq down from 0.7% qoq in 2Q. A downturn in the world industrial cycle has put manufacturing in the "hurt locker"but the more domestically oriented services sector continued to barrel along, its 0.7% qoq rise the strongest in three quarters, helped by rising employment and consumer spending power. Construction had a quarter to forget, contracting 2.2% qoq. But construction output is volatile and the data anyway jar with still strong surveys and anecdote for the sector."

"These GDP figures show momentum continuing in the UK economy.

"Consumer spending, improving productivity and wages continue to bolster UK growth. But the weaker global outlook, combined with the strength of sterling will keep the pressure on UK manufacturers, as our recent surveys show.

"As we approach the Spending Review and Autumn Statement, it is vital that the government protects areas of spending which will support the ratcheting up of UK productivity, helping to underpin sustainable public finances."

"Although today's figures undershot expectations, the news is still broadly positive. Rising wages are underpinning consumer spending, and growth in the dominant service sector continues to be healthy. The construction sector was weaker than hoped, but it is an inherently volatile, and small, part of the economy.

"The challenge now for the UK is to achieve sustainable growth which is based on improving productivity. Demographic trends and technological change mean that businesses will have to be agile to respond quickly to changing consumer demand to find the kinds of productivity gains in the future which we have been used to in the past."

"It is encouraging to see the services sector performing well, but we're concerned that other key sectors are creating a drag on the country's overall growth.

"The most significant concern is the construction sector, which has fallen by 2.2% in the last quarter and clearly needs support from the Government to tackle the challenges facing the industry, such as the skills shortage we're currently seeing. This is particularly important at a time with such high demands from the housing market.

"With around 600,000 self-employed workers in this sector, the way construction workers operate needs to be better understood by the Government. This will ensure that policymakers don't create legislation which harms the self-employed. As example of this is the hugely damaging proposal to restrict tax relief on work-related travel and subsistence, which will create more barriers for the self-employed in every sector.

"The slowdown in growth seen over the past quarter should prompt further caution from the Bank of England with regard to increasing interest rates, as the economy is still in the process of recovery."

"These disappointing figures further underline why we need a balanced recovery if our economy to withstand future economic headwinds.

"In the wider context of the ongoing recession in manufacturing, today's announcement of the largest fall in construction growth in three years should set alarm bells ringing in the Treasury.

"And it further supports our arguments that the Chancellor should not be constraining the ability of government to invest by limiting his options and playing political games with fiscal policy.

"Working households facing large cuts to their income next April will not be reassured by these figures. The priority now for David Cameron and George Osborne must be to reverse their cuts to tax credits."

"We need better balanced growth that delivers secure opportunities for working families. But while the economy is still expanding, the recovery is too weak, and Britain's manufacturing industry remains in decline. What's more, the government's failure to protect our steel industry looks set to mean the loss of even more manufacturing jobs.

"We need a proper industrial strategy to ensure our manufacturing industry keeps up with the rest of the world. And the Chancellor must invest more to boost demand rather than cutting the public services and tax credits which are vital to supporting working families."