The UK employment rate for 16 to 64 year olds hit 73.1 percent in the period from March to May 2014. This level has only been reached twice before in December 2004 to February 2005 and in late 1974 when using comparable data. The employment rate has never been higher says the Office for National Statistics (ONS).

Employment has been rising and unemployment falling for the last two years.

The unemployment rate is still falling reports the ONS and it stood at 6.5 percent for March to May 2014, the lowest since October to December 2008. 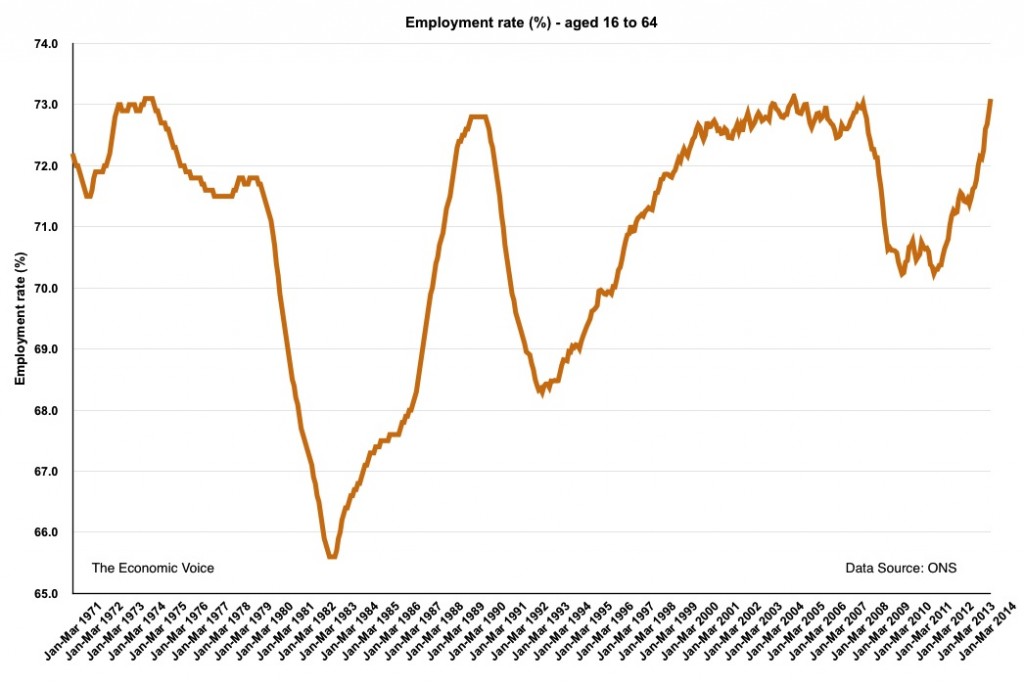 “This is another really strong quarter for the UK labour market, with employment growing and the unemployment rate falling to its lowest level since 2008, led by full-time jobs. It’s particularly encouraging to see youth unemployment continuing to come down but there’s still more to do.

“Pay growth is still sluggish – although other surveys suggest a more positive picture. Looking ahead, we expect productivity to pick up, and wages should follow suit.”

(The CBI recently published a report on how we can ensure growth benefits everyone across the UK – "Making Britain work for everyone" [1].)

Commenting on the self employment figures Simon McVicker, Director of Policy and External Affairs at PCG, said:

“Over the last year, we’ve seen the rate of growth in self-employment rise at almost five times the rate of traditional employment to stand at a record high of 4.58 million. Unemployment also fell by 6.5%, thanks in no small part to the army of brave individuals making the choice to go it alone.

“It is also encouraging to see that women are central to this growth in self-employment, up 15% while permanent employment among women grew by just 1.8% in comparison. This is likely to partly be due to the flexibility that self-employment offers, making it easier to juggle work and family commitments and could also be indicative of a welcome societal shift in attitudes away from the idea that running a small business is the sole preserve of men."

According to Simon McVicker, it is encouraging to see that self-employed people are bucking the trend when it comes to the weak pay growth currently affecting those in traditional employment.

“Our latest Freelancer Confidence Index shows that over a third of self-employed people are confident their income will increase over the next twelve months. While self-employment comes with risk, it also provides the opportunity to shape your own destiny in a way that is becoming ever more popular among Britain’s workforce.”

Statements from Jeremy Corbyn, Carwyn Jones and Tom Watson on the death of Rhodri Morgan

Greens Say No To Fracking In London

Balance swings in the eurozone as business confidence slides in Germany