UK economy boosted by good employment numbers from the ONS

The UK economy, saw a rise of 359,000 of those in work between June and August 2015 compared to the same period in 2014 according to the latest employment figures from the Office for National Statistics (ONS). Of these 291,000 were full time jobs.

The proportion of people in work aged 16-64 (the employment rate) was 73.6 percent in June to August, the highest number since records began in 1971 said the ONS.

The unemployment rate fell to 5.4 percent, the lowest since March to may 2008.

There were 9.01 million economically inactive people aged 16-64 in June to August, ltittle changed on March to May but marginally lower by 13,000 on the same period in 2014. 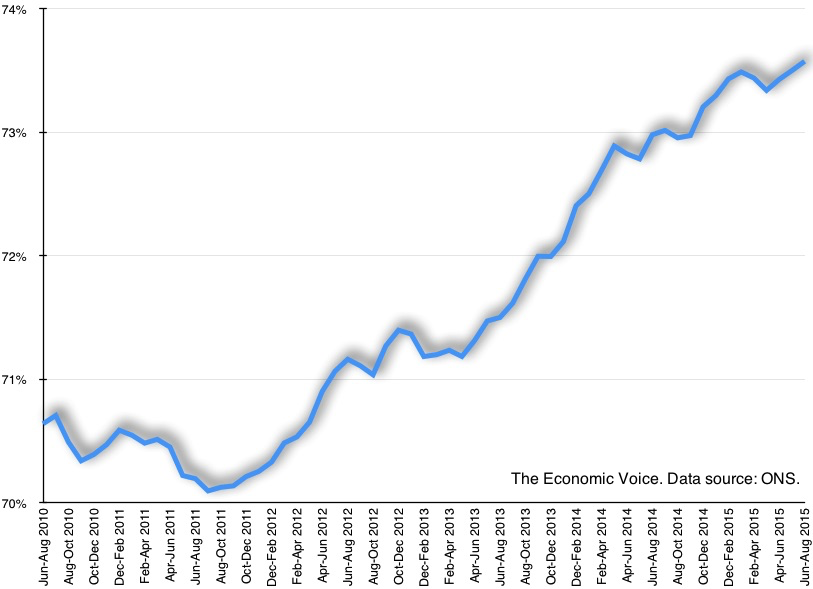 James Sproule, chief economist at the Institute of Directors, said:

“Another month of impressive jobs figures and strong wage growth show that the business-led recovery is well on track. Despite uncertainties at home and abroad, employers have continued to create jobs, raise productivity and boost pay in a vote of confidence in the British economy. Employment is up in most sectors and across the country, pay is growing and long-term, short-term, and youth unemployment are all falling. This is a welcome sign of a healthy economy, a strong private sector, and a tightening labour market.

“In the downturn, commentators were quick to point the finger at the rise in self-employment as a symptom of an ‘insecure’ or ‘fragile’ recovery. But as the economy has recovered, the number of people working on their own has remained stable. It is fundamental that politicians maintain the balance which Britain has struck between flexible employment laws and protections for employees which support our agile and entrepreneurial economy.

“IoD members have told us for more than a year that they will be raising pay in line with corporate performance. Today’s statistics prove that is the case, as businesses act maturely to make sure pay rises are sustainable and will not cause headaches down the road. The biggest challenge now is skills. As the number of vacancies remains high, more and more businesses will find they have trouble finding suitable candidates. It is important that the UK maintains an open economy so that we can attract the best and brightest from around the world to fill skills gaps, while at the same time, ensuring businesses and government focus on training and education at home.”

“We’re encouraged by businesses creating more jobs, leading to rising employment. It’s also good to see falling unemployment, particularly among those out of work for more than one year dropping by 44,000.

“While we want to see higher pay growth, this must go hand in hand with increases in productivity. It’s crucial that the Low Pay Commission retains autonomy over future National Living Wage rises to avoid unnecessary political interference and help boost jobs.”

“A decent rise in employment in the three months to August offers further reassurance that the dip in the labour market earlier this year was just a temporary hiatus. The timelier claimant count measure of unemployment rose for the second successive month. However, an increase of 4,600 was modest, and it still left the claimant count rate unchanged at 2.3%.

“Despite signs of further tightening in the labour market, annual growth in average weekly earnings in the three months to August was almost unchanged from the previous three months, running at 3% compared to 2.9% from May to July. An unusually big jump in bonuses was behind the slight uptick, with regular pay growth down from 2.9% to 2.8%. The single-month rate of overall pay in August saw a sharp deceleration, dropping from 3.6% to 3.1%. That said, with CPI inflation in August running at -0.1%, real pay growth in that month saw a strong rise.

“The lack of evidence that a tighter labour market is translating into higher wages should reassure the MPC. Also, given that productivity now seems to be accelerating, current rates of pay growth won’t necessarily result in higher prices on the shelves. More importantly the recent slowdown in economic growth could affect the labour market figures, adding a further reason for the MPC to exercise caution.”

"It's that north-south divide again! The unemployment rate may have fallen overall but as we've seen in Redcar with the closure of the SSI plant, the damaging impact of EU regulations making manufacturing and heavy industry uncompetitive is losing jobs in the North.

"We've had a summer of bad news for workers in the North, with the closure of two power stations, the loss of jobs at the Young's fish processing plant in Grimsby and two steel companies closing their doors.

"It means thousands of jobs have been lost and the knock on effect for their families and communities is devastating.

"We may hear talk of a 'Northern Powerhouse' but all we've seen from this government is the kind of hot air the environmentalists want to stop."

“Renewed employment growth is welcome and while there are still years of lost ground to make up it’s good to see private sector wages rising. But public sector workers are increasingly falling behind. The challenge now is delivering a recovery that works for everyone across the country, regardless of which region or sector they work in.

“Despite today’s improvements, it is also clear that there is still spare capacity in the jobs market. With inflation at zero, and rising numbers of workers in temporary jobs looking for full-time work, there is no case for immediate rate rises.”

“Unemployment has hit a seven-year low indicating the economy continues to build momentum. Despite the positive jobs news consumers can start planning for the festive holidays, safe in the knowledge that negative turns in prices and global growth will keep a rate rise at bay for a while to come. While consumers will enjoy the benefits of more cash in their wallet than they did this time last year, it also spells good news for savers, where a spike in earnings means more money to top up savings.”

The euro will not fail