The ONS’ decision not to revise its estimate of GDP growth in Q1 from 0.7% was unsurprising.

The most striking element of the expenditure breakdown was a sizeable contribution to GDP from net trade. With exports rising by 3.9% quarter on quarter, but imports up by only 0.6%, net trade added a whole percentage point to output, the largest boost to output from this source since Q1 2011.

However, the boost to activity from overseas in Q2 seems unlikely to be repeated in Q3, with troubles in the Chinese economy adding to the existing headwinds facing UK exporters from sterling’s rise and subdued euro-zone demand. But growth in domestic activity should be capable of absorbing strains from abroad. Business investment grew by 2.9%, the strongest rate for a year. And the forces supporting future rises in consumption and investment look robust.

Notably, although the price of oil has seen some recovery in recent days, in sterling terms it remains some 20% down on its level only two months ago. The drag on inflation from this source will boost households’ spending power and is one reason, in our view, why the MPC is unlikely to raise interest rates until well into 2016.

Looking forward, monthly growth in services output of 0.5% in June, published in today’s Index of Services, provides a strong launch-pad for growth in Q3. Consequently, we are sticking to our forecast that GDP should grow by at least 2.7% in 2015 as a whole. 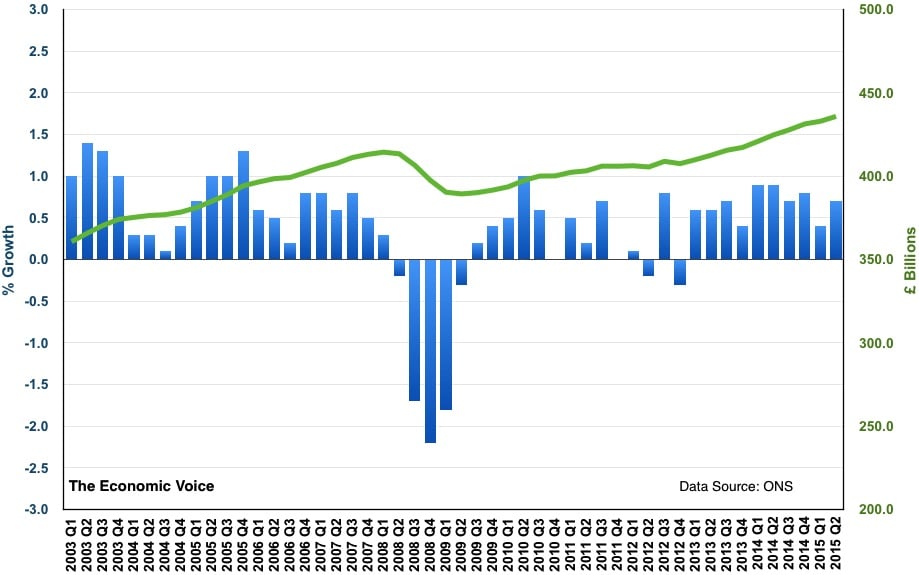 The S&P 500: Appearances can be deceptive