The latest provisional Gross Domestic Product (GDP) figures from the Office for National Statistics (ONS) shows that the UK economy grew by 0.5 percent in the final quarter of 2015. This compares to a growth of 0.4 percent in the third quarter.

Output in services increased by 0.7 percent in Q4 2015, with output in agriculture also showing a rise of 0.6 percent. However, production went down by 0.2 percent and construction output decreased by 0.1 percent. 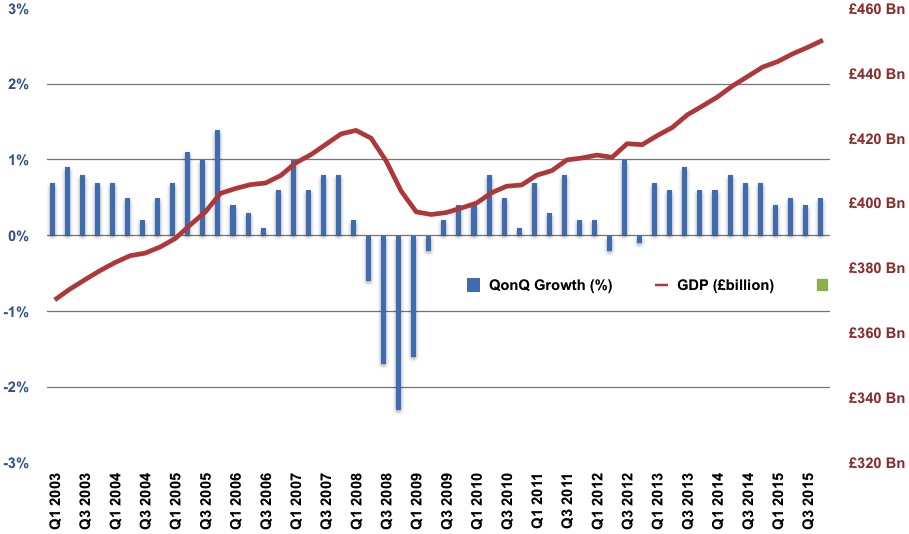 “The UK economy ended 2015 in decent health, but it’s clear that some sectors are having a tough time.

“Manufacturers are still feeling the hit from weaker global growth and competitive pressures from abroad. And while low oil prices are a boon for the economy as a whole, businesses in the North Sea industry are suffering.

“That's why the North Sea oil support package announced by the Prime Minister is positive, and the Government must continue to engage with industry closely to help ensure a smooth transition to lower oil prices.

“While the economy should see decent growth over 2016, global risks have ramped up noticeably – particularly with prospects for emerging markets looking weaker, bearing down on the outlook for the world economy.”

"This growth is welcome but there is no room for complacency from the Chancellor. This has been the slowest recovery in living memory and we are entering a period of global uncertainty without the long term investment we need for the future.

"It's further disappointing that there continue to be few signs of the vital rebalancing of the economy. We continue to wait for George Osborne's so-called 'March of the Makers', with construction still shrinking and manufacturing stagnating.

"That is why in a week when questions over the UK's tax system have dominated, manufacturing and steel firms will be wondering about the lack of government support they get whilst the Chancellor praises an unfair tax settlement with Google which has shocked politicians, UK businesses and the public alike."

“Britain’s economy fared well in the final quarter of 2015. Despite economic instability in China, and business uncertainty ahead of a vote on Brexit, British GDP continues to grow, albeit at a slower rate.

“Wages have started to recover as workers receive overdue pay rises – and the end of last year saw the beginnings of advertised salary growth for jobseekers. Most Brits have more money to spend, as is evident in increased services industry output. The construction industry saw growth stall slightly in Q4, but major projects and housing initiatives planned for this year should lift the sector. Growth should continue – as long as businesses aren’t spooked by the challenges ahead – through investment in infrastructure, technology, and most importantly, people.”

“The UK’s economy may not be shooting the lights out, but given the sheer scale of global headwinds, investors will be buoyed by these growth figures. We can’t ignore the significant challenges on a global scale, namely the slowdown in China and the collapse in oil prices, but it’s clear that the strength of the UK’s service sector has underpinned domestic growth. Yes, retail sales figures over the Christmas period were pretty soft, but discretionary spending has been consistently strong. Beyond this, the jobs market is still flying too, suggesting underlying economic strength.

“Despite this stronger than expected result, monetary policy should remain supportive. Carney is likely to remain cautious in his outlook while we navigate through the various threats to global growth at present.”

Helal Miah, Investment Research Analyst at The Share Centre, explains what this means for investors.

“The Office for National Statistics said today that the UK economy grew by 0.5% during the final quarter of 2015 and 2.2% for the year as a whole, with both of these measures in line with market consensus. Given the volatility and worries over global growth rates of late, these numbers came as a bit of a relief and as a result we have seen a small appreciation in sterling.

“Investors will undoubtedly be aware that this figure is lower than 2014’s growth rate of 2.9% and is indeed the lowest for three years. The UK’s global exposure is no doubt one of the key reasons for the moderating growth rate. Emerging markets in general are weakening, while the Eurozone struggles to make ground after the debt crisis in the region.

“In recent months, UK industrial and manufacturing production has been falling. Even the services sector, which dominates the UK economy, has evidenced slowing growth. Sterling’s strength hasn’t helped with the country’s exporters either. However, it is the UK’s resilient consumer and domestic economy which still sees this country amongst the leading developed countries in economic growth terms.

“For 2016, GDP is forecast to grow at 2.2% according to the International Monetary Fund. These numbers should not change the markets view that the Bank of England is still on course to raise base rates this year, albeit now closer to the end rather than in the middle.”

“After volatility in the financial markets during the first few weeks of the year, these GDP figures should settle nerves about the health of the real economy. Growth of 0.5 per cent a quarter is far from remarkable, but with services continuing to power the recovery, and housebuilding expected to undergo something of a revival as the year progresses, this expansion looks sustainable.

“Across the economy, high levels of debt remain a concern – especially at this point in the cycle. This debt bubble can still be deflated with effective monetary policy and it would be wise to take action before it becomes unmanageable.”

“The economy has now expanded for 12 consecutive quarters and Q4’s growth represented a slight improvement on the 0.4% estimated for the previous three months.

“Q4’s rise in overall output was in line with the MPC’s expectation and should support the more cautious line taken by the Committee. Notably, the Government only recently reiterated the need for sustained above-trend growth in the economy as one criterion which needs to be met before considering a hike in interest rates. But Q4 was the fourth consecutive quarter to see growth fall short of that threshold. The economy continues to grow below its long-run rate and the year-on-year rise in output of 1.9% came in below 2% for the first time since Q1 2013. Moreover, growth in 2015 as a whole was well down on the 2.9% recorded in 2014.

“Combined with economic headwinds, not least from global economic troubles, it is difficult to see the Governor’s condition being met anytime soon.

“The breakdown of Q4’s growth offered more reason for mixed feelings. On the one hand, growth in the dominant services sector accelerated, with business services and finance driving the expansion. But some of this growth was due to base effects, with estimated monthly growth in services output averaging only 0.2% from October to November. Services were the only major part of the economy to see output rise.”