The latest preliminary UK GDP figures from the Office for National Statistics (ONS) shows that the UK economy grew by 0.7 percent in Q2 2015 (April-June) compared to Q1 (January-March) when growth was only 0.4 percent. 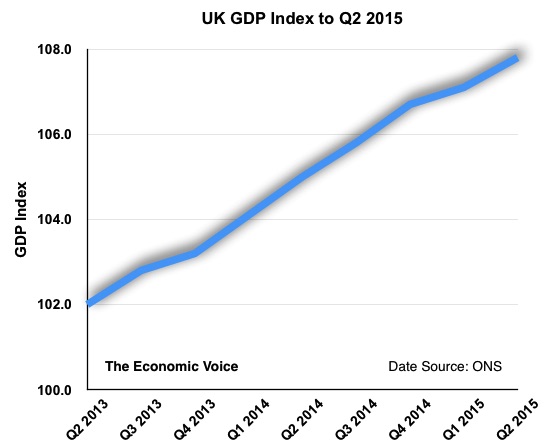 "As we expected, growth in the UK economy is back on track once again following the loss of momentum over the first quarter.

"We should see similarly decent growth through the rest of the year as low oil prices and inflation help drive consumer spending and business activity outside the oil sector.

"But performance is mixed across sectors, with UK manufacturers going through a tough time as the stronger Pound hits sales into the Eurozone. Meanwhile, the Eurozone is still grappling with uncertainty over the Greek bailout."

"The preliminary estimate for GDP showed the UK economy rebounded in the second quarter, following a disappointing start to the year. Real GDP growth picked up to 0.7% in the three months to June, an improvement compared to the 0.4% growth recorded for the previous quarter.

"The pickup in activity was driven by an improvement in industrial production, where growth in the mining and quarrying industry picked up sharply. Manufacturing which is a sub-sector of industrial production, contracted over the quarter, highlighting the difficulties manufacturers are facing with the strength of sterling hitting export demand. The services sectors also improved, especially business services and finance. Otherwise, construction activity was flat during the period.

"Overall, the latest GDP figures suggest that the economy is performing strongly and should continue to create more jobs, putting upward pressure on wages. We forecast the pace of growth to remain similar until the turn of the year, before austerity starts to slow activity. As for the Bank of England, with external concerns such as Greece subsiding, the Monetary Policy Committee will be seriously considering whether it is time to start raising interest rates.  We expect the Bank to hold fire until early next year, as inflation is currently too low. However, once the Bank starts to hike rates, we expect them to move at a faster pace than markets are currently pricing, which may put further upward pressure on sterling, and potentially have a negative impact on UK equities, given the importance of overseas earnings."

"The welcome rise in second quarter GDP points to full-year GDP growth of 2.5% – 3.0%, underscored by improving business sentiment and rising real earnings being enjoyed consumers. Robust GDP growth will intensify hawkish calls on the Bank of England to normalise monetary policy sooner rather than later, and consumers should now be braced for a steady stream of rate rises, starting in early 2016."

"It is encouraging to see another set of good, solid growth figures. The fact that GDP per capita may be back to its pre-crisis peak is particularly welcome news in terms of living standards and marks the latest milestone in what has been a business-led recovery. After years when preserving jobs was rightly the priority, higher wages justified by corporate performance are giving us sustainable GDP growth and an economy on the right road.

"With such high levels of both public and private debt, growth after the crisis was always going to be slower than the unsustainable boom years of the early 2000s, when quarterly growth at times topped one per cent. Growth of 0.7 per cent is impressive, but not fast enough to raise concerns that the economy may be overheating. With the economy on more stable footing than it has been for many years, consumers and business should use this opportunity to consolidate and pay down their debts.

"The Bank of England must now look closely at its interest rate policy. This is the latest piece of evidence which suggests the time to start normalising interest rates is now. An economy growing at 0.7 per cent per quarter, unemployment at just 5.6 per cent and real wage growth of more than three per cent has no need for historically low interest rates of 0.5 per cent. The IoD continues to call on the Bank of England to start the gradual process of normalising rates as soon as possible. We would like to see the Monetary Policy Committee vote for a 25 basis point increase when they meet next week."

"The preliminary estimate for GDP growth in Q2 confirms the rebound in the economy following the surprisingly soft expansion seen in Q1. The economy has also ticked off another landmark, with GDP per head finally regaining its pre-crisis level after a gap of just over seven years.

"The sectoral breakdown emphasised the 'two-speed' nature of the expansion, with virtually all of the growth coming from the services sector. The success of the services sector is partly a reflection of the boost to consumer spending from 'noflation'. Manufacturers, in contrast, are being buffeted by the impact of the stronger pound, which is constraining export demand. The wildcard has been the performance of the mining & quarrying sector, where output rose by nearly 8% in Q2. However, given the collapse in the oil price, it is unlikely that this will be sustained.

"We remain relatively upbeat about the short-term outlook. Very low inflation and strengthening wage growth will continue to support consumer spending power. Meanwhile, investment conditions remain favourable, with firms enjoying strong profitability and the corporate sector sitting on large accumulated cash piles. Therefore, we remain confident that the economy will grow by at least 2.7% this year."

"UK growth needs to be stronger than this to withstand mounting instability from Europe, China and the world economy.

"Today's figures show we need a more balanced recovery, with construction output weak for the past nine months.

"The OBR has revised down productivity next year and for three years after that. Manufacturing is down by 0.3 per cent and the Government is on course to miss its exports target by hundreds of billions of pounds.

"The Chancellor is complacent at a time when he should take action to support exporters and strengthen Britain's infrastructure. Pulling the plug on major rail electrification and hitting households next April with a work penalty in the tax credit system are the wrong choices for the long term."

"The government's economic plan is not delivering what was promised. We were told there would be a march of the makers, but instead manufacturing continues to decline. And while there is a desperate need for affordable homes, construction output remains in the doldrums.

"We need a new plan for productivity and growth, because the current one is not delivering across the whole economy – a plan with stronger investment in infrastructure, innovation and skills. But the cuts the Chancellor is planning will damage demand and run the risk of reducing future growth."

"Economic momentum is back after a sluggish first quarter, giving Carney more ammunition to raise rates later this year. The UK's dominant service sector was always going to do much of the heavy lifting in economic growth, especially as consumer spending improves. However, manufacturing figures provide some cause for concern, pointing to a poor performance from exports. It's clear that the strength of sterling is holding back exporters, and we are yet to feel the much-awaited economic recovery in the Eurozone, the UK's largest trading partner.

"Overall, what these figures show is that the UK economy and its stock market are two different animals entirely. While the economy is clearly improving, the markets have been stuck in the mud. Domestic strength is being felt by consumer centric stocks, but the FTSE's dependence on globally exposed natural resources companies is weighing on its overall performance, as falling commodity prices take their toll. In this environment, active stock selection is paramount."